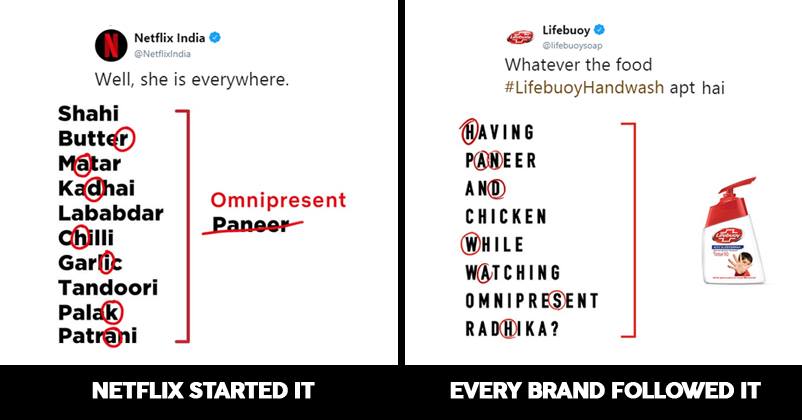 What started off as a regular social media trolling of Radhika Apte and Netflix’s “atoot” union has taken a grand form now. At first, Netflix decided to join the fun as they made a series of memes on itself. They went a step ahead to create a video in which they declared Radhika as “Omnipresent” in their movies and web series.

Radhika made this poster herself.

Zomato followed it up with a funny creative in which they called “Paneer” as versatile as Radhika because it can be used in any kind of dish.

Netflix was at its genius best when they discovered Radhika even in the creative of Zomato.

Now, this has become a trend as several brands are joining in and using this idea to announce themselves as versatile. The tweets by brands like Lifebuoy, HDFC Bank, Tata Sky, Dell and many more will make you laugh hard and appreciate their brilliance as well. Even Ahmedabad Police joined the fun.

@ZomatoIN @kfc @NetflixIndia For every brand, in every situation, interns apt hai!

Chief Justice Slams The Case Against Priya Prakash Varrier. Asks You Have No Other Job?
Vodafone & Idea Talked About Merger On Twitter. Jio Trolled Them In The Best Way