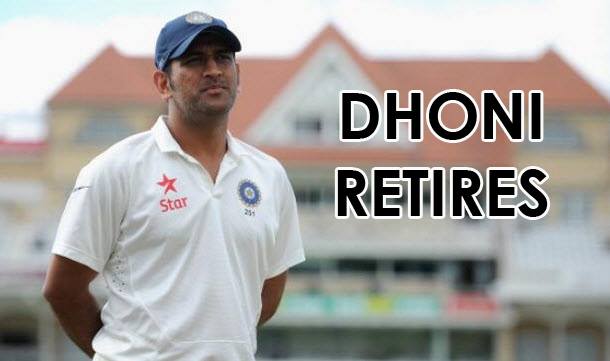 And you read that sentence absolutely right, The Captian Cool took this decision when India drew the 3rd Test with Australia in Melbourne on Tuesday.
No doubts, that Mahi was the best captain that Team India ever witnessed, In his captaincy we became the Number #1 Team in Test Cricket, Won the World Cup & many other such overwhelming victories.

A BCCI statement said: “One of India’s greatest Test Captains under whose leadership India became the No.1 team in the Test Rankings MS Dhoni, has decided to retire from Test Cricket citing the strain of playing all formats of cricket
MS Dhoni has chosen to retire from Test Cricket with immediate effect in order to concentrate on ODI and T20 formats.
BCCI while respecting the decision of M S Dhoni to retire from Test Cricket, wishes to thank him for his enormous contribution to Test Cricket and the laurels that he has brought to India.
Virat Kohli will be the captain of the Indian Team for the Fourth and Final Test against Australia to be played in Sydney from the 6th of January 2015.