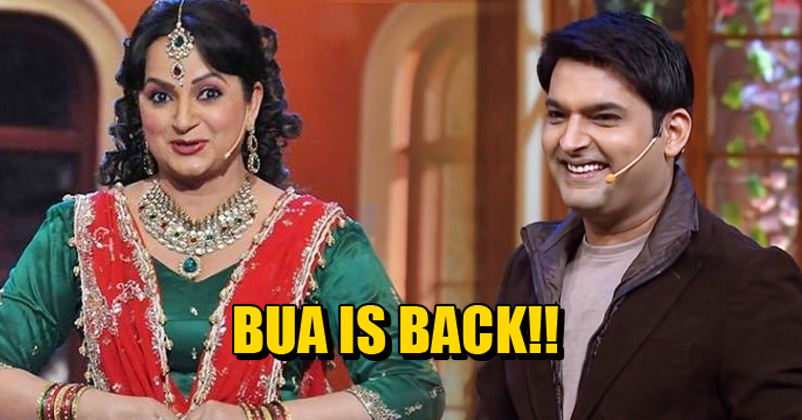 We all know that Upasana, popular as ‘Bua’ had some creative differences with Kapil Sharma and the production house, and instead of joining ‘The Kapil Sharma Show’, she decided to stay back with the Colors’ show ‘Comedy Nights Live’. Earlier, Upasana had become famous with ‘Comedy Nights With Kapil’ and later, when Kapil Sharma’s show shifted from Colors to Sony owing to some differences, she didn’t go with the team and preferred staying with Colors since she was getting higher payment on this channel. But later on there were reports that Upasana Singh was unhappy with ‘Comedy Nights Live’ too since there was no work satisfaction and there were problems with the script.

However, there is good news for all you guys. Do you want to know what? Well, Upasana Singh is once again joining Kapil’s team in ‘The Kapil Sharma Show’.

Preeti Simoes the creative director of ‘The Kapil Sharma Show’ announced this good news and tweeted an image of Upasana Singh holding a book and rehearsing. Have a look at her tweet; Even Upasana gave confirmation about the same stating;

“Yes, I have started shooting with the team. I can’t tell you how happy I am. It is like coming back home. When I walked in, they rushed to me. There were hugs all around. I felt so loved and wanted. The team is highly professional. Everything is written in advance and I get time to prepare well. I will be coming on air in the Sunday episode. There was no sense of discomfort, everyone made me feel so welcome. The Kapil Sharma Show has genuine comedy.”

Now, be sure of getting double masti on ‘The Kapil Sharma Show’! So guys, what do you think about this? Do let us know your comments in our comments section below.

15 Astonishing Facts About Rajinikanth’s Kabali Movie.!!
Here Are The Real Names Of These 22 WWE Superstars!