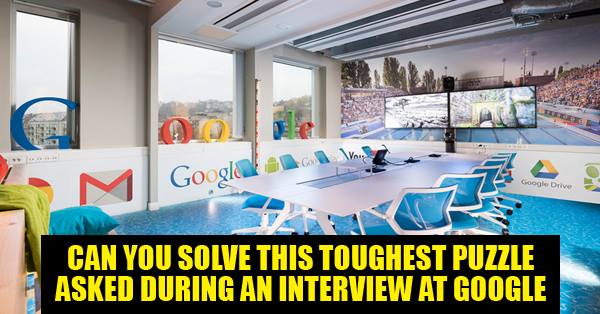 Most of us have a habit of solving puzzles and riddles in newspapers and other magazines. In fact, we take it as a challenge and will try it very hard to solve them. For all those riddle lovers, here is a riddle used during job interviews for Goldman Sachs and Google.

So here goes the riddle, give some work to your brain and solve this:

What should they do to save themselves?

Okay then here is the answer:

Here is the best strategy to save 99 prisoners with 100% certainty, while the remaining 1 prison has a 50-50 chance of survival.

With the responses they have heard behind, rest of prisoners will get an idea about their own hat colours based on the hats they see in front of them.

Do you have any other solution of this riddle? Were you able to solve this riddle? If yes then how many minutes did you take? Share in comments section below.

Continue Reading
You may also like...
Related Topics:Blue, Can You Solve This Riddle Asked During An Interview At Google?, Google, Hat, Red, Riddle, Solution