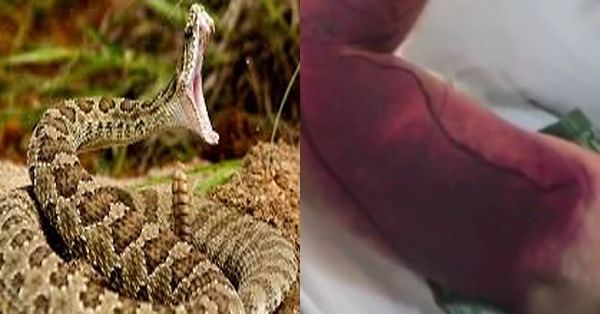 The craze of taking selfies is really on its extreme which is apparently visible through many cases taking place on a regular basis. Let me ask you a simply question; how much can you pay for taking a selfie; let’s make it ‘your most favorite and desired selfie’? Even if you are a die-hard selfie addict, can you pay $150,000? I know your answer must be NO which is naturally expected from a sensible person. However, it would come to you as a great shock cum surprise that this US man had to pay over $150,000 for a selfie with a rattlesnake. Shocked?

It so happened that the guy was trying to take a selfie with the snake and just then the snake bit him. Let us tell you that rattlesnake is one of the most poisonous and dangerous snakes of the world and this selfie finally sot the man more than $150,000 hospital bill.

Hats off to the gust of Todd Fassler who dared to pull such a harmful snake from the bush; but unluckily it bit him right when the man had been trying to compose a flawless selfie and at once, his whole arm turned purple. In his words, “My whole body was shaking and gyrating. It literally paralysed my whole body.”

Todd who is from California’s San Diego further added, “My tongue was like out of my mouth, my eyes were off to the side.”

Nevertheless, his deadly recovered but it could be one of the biggest shocks of any common man’s life; especially if it would have happened in India, a huge hospital bill worth $153,161.

Todd kept a rattlesnake as pet for about 12 months; however, after this deadly assault which took place on 4th July, he made up his mind to release the snake into the forest which is its actual home.

These Muslim Bhakts Of Bajrang Bali Have Won The Internet For All Right Reasons
This Girl Just Crossed All The Limits Of Insensitivity. #Yeppie. Kalam Dadu Dead