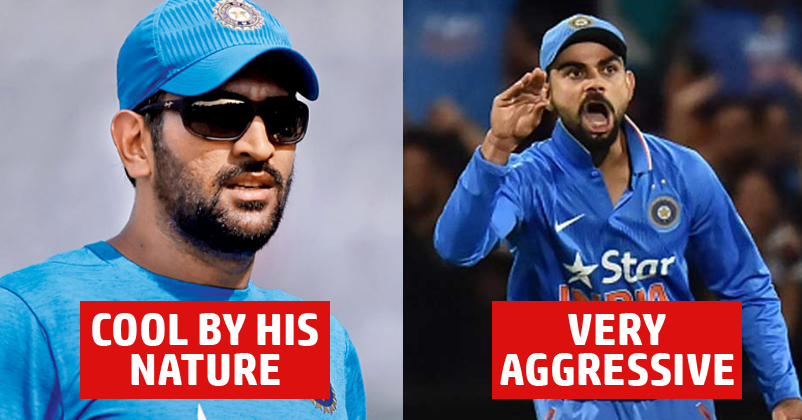 Mahendra Singh Dhoni and Virat Kohli are the two giants when it comes to cricket. They both are the backbone of Indian cricket team at the moment and both of them had tremendous contributions for team India in recent years. After Dhoni, Virat Kohli is leading team India in all formats now. They both are different personalities and have different attitude towards the game. Let us compare both these great players. MS Dhoni is very cool and composed personality. He always has the same expressions on his face all the time. You just can’t determine what he is feeling at the moment. On the other hand, Virat Kohli is very expressive and aggressive. He doesn’t mind having an argument with the opposition.

MS Dhoni has very unorthodox style of batting, he has a baseball kind of swing but he has got amazing shots and killed the bowling opposition many times in his whole career. MS Dhoni is considered to be a hard hitter of the cricket ball. On the other hand Virat Kohli has got a very good technique and he has a wide range of shots. Kohli’s game depends more on timing of the shots.

Virat Kohli is one of the fittest cricketers of present times. And according to him fitness is the main thing when it comes to cricket.

On the other hand, Ms Dhoni is considered as the fastest runners in the game of cricket. We have recently told you that MSD once completed a run in approx. 2.7 sec, which was the fastest run in the history of cricket and was even
compared to Usain Bolt. MS Dhoni is considered as a very tough player both physically and mentally. When it comes to handling the pressure, there is no match of MSD. He is one of the best finishers in the game and won many matches for India under pressure.

Virat Kohli has also been emerging as a great performer under pressure. In recent few years, he also played many match winning innings.

We have seen extraordinary leadership of MS Dhoni in past 10 years. There is no match of his records. He has won each and every ICC tournament and made team India no.1 in all the formats of the game. No one can question his leadership skills. On the other hand, Virat Kohli also showed great leadership skills as captain. Now we need to see if he would do justice to the role constantly!

This Video Of Yuvi & Dhoni Is A Treat For All Fans! They Just Can’t Stop Praising Each Other
OMG! Pacer RP Singh Threw Little Fan’s Phone Who Wanted To Click Selfie With Him