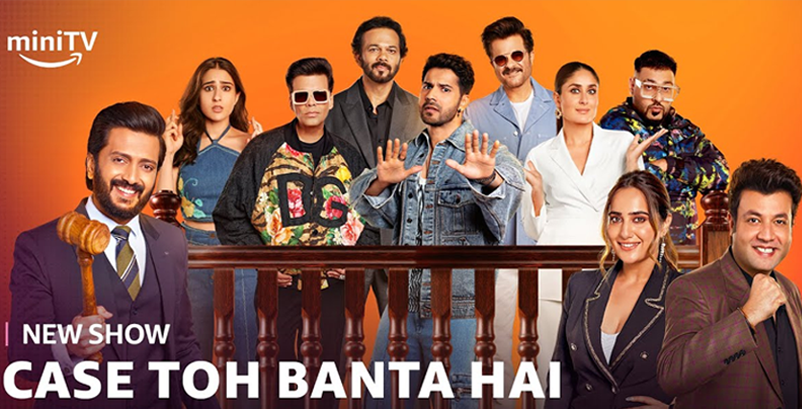 Case Toh Banta Hai, a celebrity court-of-comedy series which airs on Amazon Mini TV has been creating ripples of excitement amongst the audience and it isn’t just because of its comedic brilliance. With a star cast like none other, this show casts a side eye in camaraderie jest to all other reality TV shows being hosted and continues to reign in the hearts of its audience.

In the show, Bollywood celebs defend all allegations and accusations that have been placed on them over time by Riteish Deshmukh. Varun Sharma consistently yields them support in defending themselves and acts as the one who understand their concerns. The show has immensely caught on with individuals especially owing to the engagement and promotions that have been quirky yet genuine. From teasers to sharing tit-bits of accusations, Amazon Mini TV has incorporated a human element by bringing this show to its audience.

“The show had a fantastic opening surpassing all our expectations,” maintains Girish Prabhu, Head of Amazon Advertising. “To raise the bar even further now, we’re delighted to reveal another set of amazing celebrities who will be joining us on this. Viewers from all parts of India will be able to enjoy this show every week for free.”

A show which takes us back to the time when Kapil Sharma and Krushna Abhishek had just started to reign our hearts with their sets on Comedy Circus, this show serves as a predecessor in itself. With the shift in the type of content being delivered, modern India is set to welcome comedy that might just be considered risqué and it’s heart-warming to see a lineup so caught in the public eye. With atrangiilzaams laid down on these celebs, Amazon Mini TV brings you a show that promises to set you up with ripples of laughter.