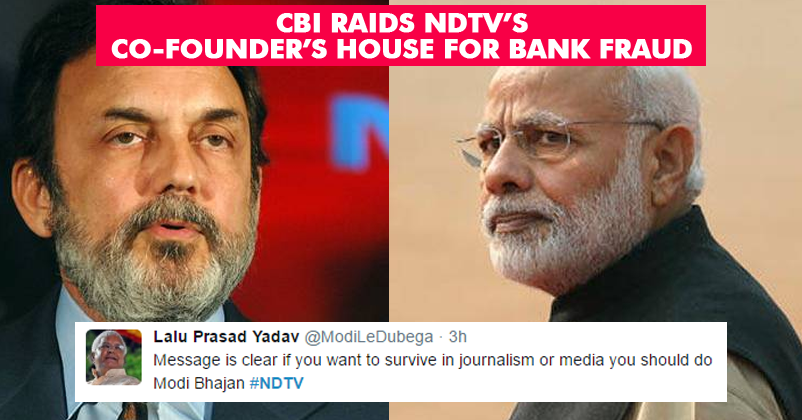 On Monday, Central Bureau of Investigation conducted raids on the offices and homes of Prannoy Roy and his wife Radhika. They both are promoters of NDTV news channel and this action has been taken by CBI in relation to a bank fraud.

The office of the news channel’s promoter company, RRPR Holding Private Ltd, was searched by the CBI officials but they didn’t carry out any search on the premises of NDTV. Total four places in Delhi and Dehradun have been searched by CBI.
Last week only, a case was registered by CBI against NDTV in relation to the irregularities that took place in a loan taken in 2008. NDTV took a loan of Rs. 366 crore from ICICI Bank on the basis of personal guarantees of its promoters and this loan was settled by NDTV the next year but it was settled at an amount which was Rs. 50 crore less than the principal amount. CBI’s banking fraud division has registered a case in this concern and a source from CBI said,

“A case of bank fraud has been registered against RRPR and unknown bank officials. This is part of CBI’s recent crackdown on bank frauds and wilful defaulters.”

This is not the only legal matter which is being faced by NDTV. The Income Tax authorities and ED are already investigating NDTV since 2014 and just recently, Delhi HC gave permission to the I-T department to start investigating the matter in which the channel received funds from a foreign financing institution but the account was settled at an amount which was 80% less from the original amount. RRPR is already being investigated by CBI and ED in connection to Aircel-Maxis case and also for the planes purchased by Air India.

Prannoy and his wife remained unavailable for comment but NDTV issued a statement:

“This morning, the CBI stepped up the concerted harassment of NDTV and its promoters based on the same old endless false accusations. NDTV and its promoters will fight tirelessly against this witch-hunt by multiple agencies. We will not succumb to these attempts to blatantly undermine democracy and free speech in India. We have one message to those who are trying to destroy the institutions of India and everything it stands for: we will fight for our country and overcome these forces.” If you remember, a few days back, the Executive Editor of NDTV, Nidhi Razdan, asked BJP spokesperson Sambit Patra to either apologise or leave the show as Sambit made a statement that NDTV has a hidden agenda, which didn’t go well with Nidhi. There are also rumours that this is the counter attack by BJP.

When #NDTV termed punitive action on their Pathankot coverage as "attack on free speech", they will obviously sing the same tune again.

A promoter and CEO of a listed company has been raided for his personal financial wheeling dealing. Why is this agnst democracy? #NDTV

What do you have to say about this? Share your views in our comments section below.

Train Ran Over A Girl Who Was Talking On Phone! Watch Video & See What Happened Next!
This Girl Made Her Dad Proud With Her Result In The Same School Where He Is A Van Driver