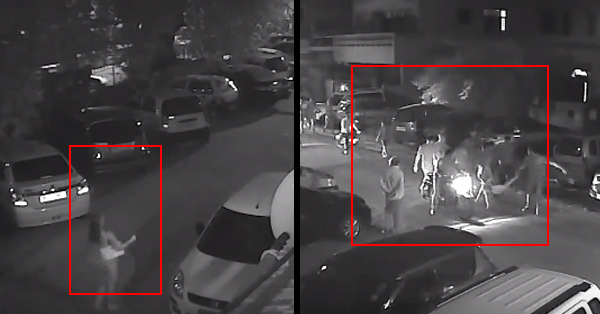 SHOCKING!! & Inspiring Too!!!
This Video shows us why and how a simple reaction from someone can stop a crime.
This video uploaded by LIVELEAK Channel on Youtube shows a foreigner who is walking on the street of Delhi and talking on the phone is being stalked and followed by a guy who later on attacks her after following her. But to his surprise there was a group of young football players walking by on the other side of the road who notice this and come to the rescue of the Foreigner girl. Looking at the group of young boys coming near the Molester runs for his life and is chased down by the group of boys. The boys later on Catch him, beat him & drag him on the road where the incident took place.
We’ve recently come across many social experiments where people fail to react to any act of violence or molestation happening on the roads. But looking at this act of those young boys the lost faith in humanity seems to have been restored and it is quite clear now that people don’t keep quiet for everything happening in front of them. They react & when they react they save a life.
Have a look at this video which will inspire you and make you feel about those young boys who saved a Foreigner from the clinches of a Molester in Delhi.

SHARE & SPREAD this brave act of these bunch of Class XII young heroes who call themselves as Malviya Nagar Maniacs!!

Continue Reading
You may also like...
Related Topics:CCTV Footage Of A Molester Attacking A Foreigner!!, Delhi Group Saves A Foreigner From Molester