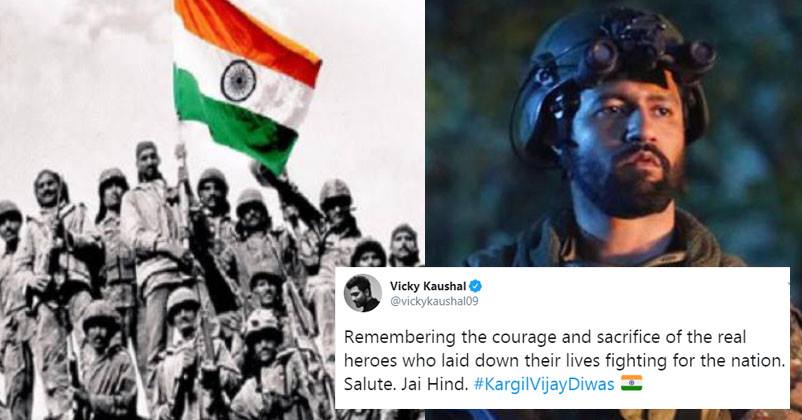 Our nation is celebrating the 20th Anniversary of India’s victory over Pakistan. Kargil Vijay Diwas, named after the successful “Operation Vijay” was the name given to India’s limited time conflict with Pakistan on 26 July.

On this date in 1999, India successfully took command of the high outposts which had been lost to Pakistan. Every citizen is paying their tribute to the soldiers who fought in the 1999 Kargil War.

#KargilVijayDiwas | Soldiers lighting candles at Kargil war memorial Dras, in memory of the soldiers and officers who laid down their lives in the war in 1999.#कारगिल_विजय_दिवस pic.twitter.com/6FX21oKgn7

From our Prime Minister to Akshay Kumar to Virat Kohli salutes the braveheart soldiers who sacrificed their lives to save our nation.

Celebrities, ministers, athletes and the proud citizens recall the unforgettable sacrifice made the soldiers for the sanity of the nation:

During the Kargil War in 1999, I had the opportunity to go to Kargil and show solidarity with our brave soldiers.

This was the time when I was working for my Party in J&K as well as Himachal Pradesh.

The visit to Kargil and interactions with soldiers are unforgettable. pic.twitter.com/E5QUgHlTDS

The Kargil Vijay Diwas leaves a mark of pride and honor in every Indian heart.Saluting the brave souls who pledged their lives for the sake of Mother India. Jai Hind #KargilVijayDiwas #JaiHind pic.twitter.com/2MX0rc5gNh

We will never forget all the sacrifices you made for us. Respect, Love, Salute. 🇮🇳 #JaiHind #KargilVijayDiwas

I salute the unflinching courage of our martyred soldiers & everyone who fought the Kargil War diligently, protected the nation & its people. Your sacrifices will be held in high regard & remembered today & every day. #KargilVijayDiwas pic.twitter.com/PCL9RvYpR2

I’m not much into books, but today as we pay tribute to our brave martyrs on 20yrs of #KargilVijayDiwas, I’ve picked up #IndiasMostFearless 2 by @ShivAroor & @rahulsinghx . May we never forget our soldiers whose courage and heroism lets us live in peace, day after day. pic.twitter.com/gI6s20MwBX

🙏🙏🙏🙏 saheedo ko pradaam! and congratulations to all indian brother and sister. I m really proud of our Indian army. #KargilVijayDiwas pic.twitter.com/DnAUltnY67

Salute to indomitable courage of our Soldiers on #KargilVijayDiwas Jai Hind pic.twitter.com/QCVb36jkjF

The sacrifices of our brave soldiers will never be forgotten. Respect to our true heroes we salute you.🇮🇳🙏🏻 #KargilVijayDiwas

Remembering the courage and sacrifice of the real heroes who laid down their lives fighting for the nation. Salute. Jai Hind. #KargilVijayDiwas 🇮🇳 pic.twitter.com/dZZeNEQj73

Big salute to each and every martyr who fought fearlessly and sacrificed their life for us, our safety and our nation.

Hats off to their indomitable courage and to the sacrifices of their families. We will always remain indebted 🙏

Remembering all the bravehearts and martyrs with love, reverence and gratitude on this #KargilVijayDiwas .. Jai Hind. 🇮🇳

Paid homage to the martyred soldiers of the Kargil War at the War Memorial in Chandigarh as we mark the 20th anniversary of #KargilVijayDiwas. I salute our Bravehearts, who made the ultimate sacrifice protecting the sanctity of our nation. 🇮🇳 pic.twitter.com/CMelHxUqOo

We salute our soldiers who sacrificed their lives for the sanity of the nation.