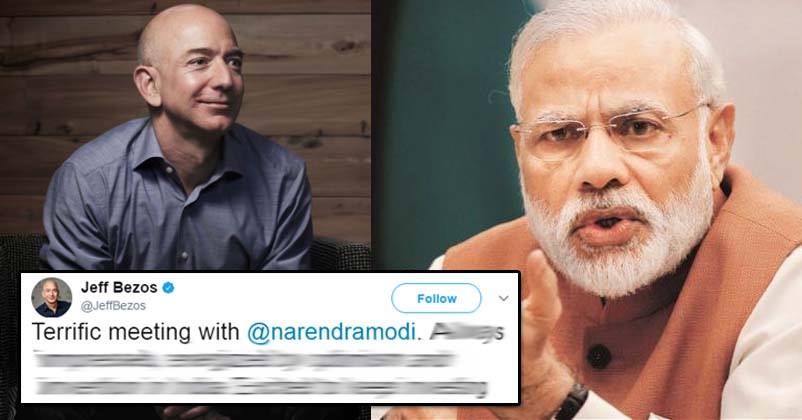 Amazon has become a renowned name in India and has uncountable loyal followers. But, we can’t deny one fact that this American online retail giant gets stiff competition from other biggies like Flipkart, Jabong, Myntra, eBay etc.

However, in a round-table interaction with PM Modi, Jeff Bezos, the CEO of Amazon, has proposed something very big, in order to leave the competitors behind. Well, he has announced that Amazon will be making investments of up to USD 5 billion in India. The main aim is to come up with more and more Amazon units in India, so that speedy deliveries can be enjoyed. According to the Bezos, India is a good market for growth and hence, investments are planned accordingly. Funds would be constantly pumped into its India units, so that the rivals can be overpowered easily. More than just saying, the CEO of Amazon has given a “Commitment” of this investment. 20 big names attended this round-table interaction and some of them included Sunder Pichai (Google), Tim Cook (Apple), Shantanu Narayen (Adobe), John Chambers (Cisco) and Ajay Banga (Mastercard).

What Jeff Bezos tweeted after meeting Modi has won our hearts; rather, it will make all Indians proud. Firstly, PM Modi tweeted about his meeting with CEOs in Washington DC.

On this, Jeff gave a heartwarming reply;

Terrific meeting with @narendramodi. Always impressed, energized by optimism and invention in India. Excited to keep investing and growing. https://t.co/xhQ58dik3y

His tweet read, “Terrific meeting with @narendramodi. Always impressed, energized by optimism and invention in India. Excited to keep investing and growing.

And here’s how Indians reacted;

@amazon has redefined customer satisfaction. If an item is available in @amazonIN, there is no second thought. Way to go!

You will be king of the world!

You gonna be the king of world if you do something in India!

India can offer many things!

It’s good to see how the CEO has praised India for being a terrific market. Our country has a huge potential for investors but realization is important; we wish him all the best for his future ventures and assure him that he won’t regret his decision ever.

13 Mind Boggling Facts About Bill Gates’ House That Will Surprise You To No End!
Bhumika Sharma Has Made India Proud! Wins “Miss World” Title At World Bodybuilding Championship!