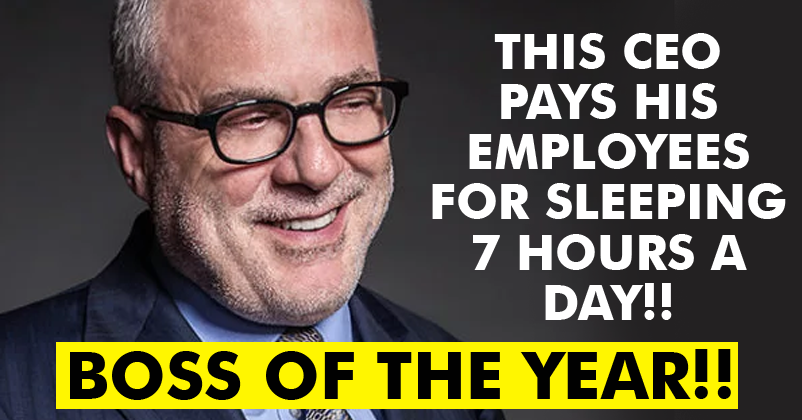 Sleeping is something that is very soothing to our eyes, apparently, we don’t even need to blink for it. The life of a student and an employee can be very much similar in a way if they are sleep deprived. The teacher or the boss can be an arse to him if he has fallen short of a ‘good night’ sleep. Taking naps during office hours is indeed an irritating sight for many bosses. This is quite normal. But what if we tell you that there is a CEO who pays his employees to sleep. Don’t you want to run away with your pillow just so as to work under him? I presume the answer is YES. It’s the CEO of Aetna company and his name is Mark Bertolini. In an interview given to CNBC, according to him, sleep is really important. “Being present in the workplace and making better decisions has a lot to do with our business fundamentals.” he said.

According to him, a person can’t be well prepared if he is half asleep. He supports his argument of ‘better sleep can lead to bigger profits’ through a series of statistics and numbers. In order to earn bigger profits via this ‘good night sleep’ scheme, he promises his employees to pay them extra money. Wondering the rates? Have a look at it. If a person can get 20 nights of sleep for seven hours or more in a row, he will be given $25 for a night and up to $500 for a year. According to a report submitted by McKinsey, out of 196 business leaders who were subjected to sleep survey, 47% of the respondents say that their organizations expect them to be too responsive to emails and phone calls. Around 43% claim that they don’t get enough sleep at least four nights a week. Nearly 6 out of 10 claims that they don’t sleep enough at least three nights a week. When such a CEO takes a special effort to lay stress on the importance of a good night sleep, it indeed changes people’s perception and the cultural delusion that most businesses have been operating under. In order to keep a track on their program, the company has collaborated with the Duke University to study the effectiveness of the firm’s wellness program, which includes better sleep information, yoga, and meditation.

At last, it’s about investing in your employees so that they can come up with better returns in form of better performances. If they perform better, then their hard work will definitely show up in the company’s revenue charts.

Continue Reading
You may also like...
Related Topics:ceo pays, employee sleep, to sleep

Here’s A Page Dedicated To The Boys Who Work Hard For Clicking Their GFs ‘Candid’ Photos!
What Girls Want? 8 Ways To Make Your Girl Happy