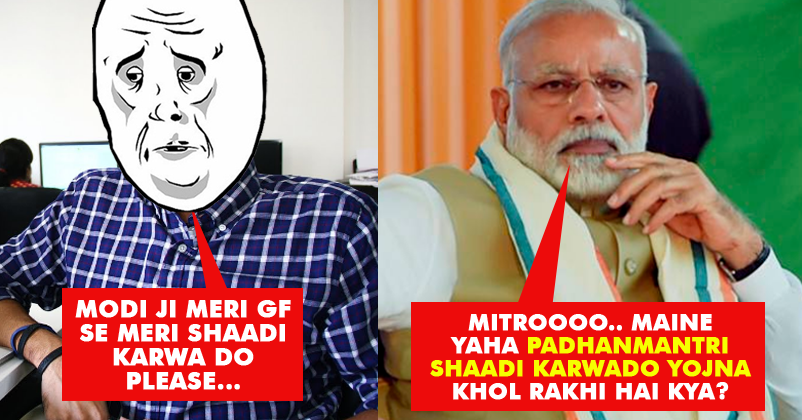 Narendra Modi has started a Centralized Public Grievance Redress And Monitoring System which public can use for sending their message, suggestions, opinions, requests and even complaints to PMO. While the system gets a lot of messages every day, 60% of them are reported to be frivolous requests.

One such request was sent by a Chandigarh-based Mechanical Engineer in which he wrote the PM to help him arrange the marriage with his girlfriend by sending a volunteer who can convince the parents on both sides. The officials who manage the CPGRAMS told that it is generally flooded by many messages which don’t have any serious purpose or value and In fact, they bring a smile on their faces.

They gave one more example of a resident who wrote to the PMO to provide a helicopter to the Chandigarh police so that the officials can reach a crime spot in time. This despite the city having a geographical spread of just 114 sq km and a population of a little over 10 lakh.

The Chandigarh administration receives around 400 grievances through the PMO’s grievance system every month. Officials say many of them are personal in nature. Your Blood Will Boil After Hearing What The Lawyer Of Nirbhaya’s Rapists Said On The Verdict
In Yogi Adityanath’s UP, Cows Are Safe But Women Aren’t! 8 Men Gang Raped Woman On Highway!