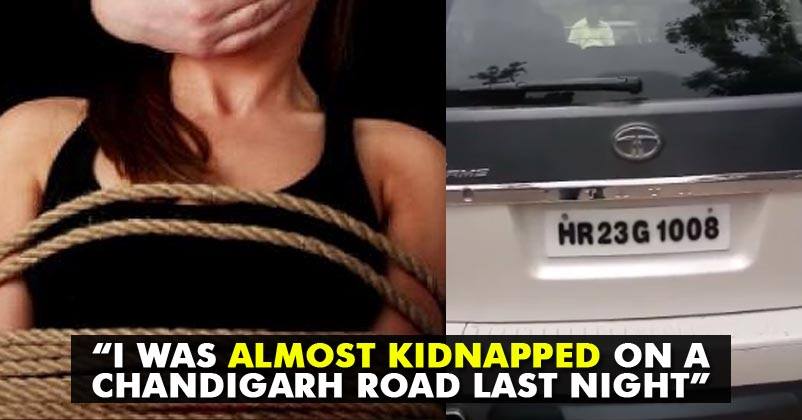 Chandigarh is known as of the most beautiful cities in India thanks to the greenery and cleanliness around. Along with these qualities, the city is also considered quite safe for its citizens and even the ladies.

A couple of boys with political links tried to kidnap a Chandigarh girl recently but instead of going into a panic state and submitting herself to the situation, the girl showed smartness and got the kidnappers arrested by police. 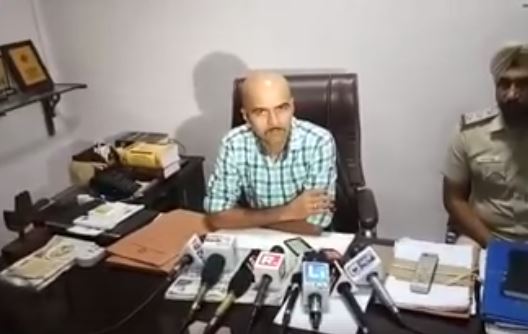 The girl herself wrote down her experience on Facebook. Read On.

WAS ALMOST KIDNAPPED ON A CHANDIGARH ROAD LAST NIGHT.
That being said, I’d like to take a moment to commend and thank Chandigarh Police for unparalleled efficiency and attention to a distress call from me. They almost restore my faith in the system.
Here’s what went down;
I was driving home from the sector-8 market at about 12:15am, and crossed the road into sec-7, where the petrol pump is. I was also on the phone with a friend at the time, and realised about a minute later that a car was following me.
It was a White SUV, and as I noticed it, it pulled up and started driving alongside my car. I was now in sec-7, heading towards the lights next to St.Johns’ in 26. There were 2 guys inside the SUV, and they seemed to really be enjoying harassing a lone girl in the middle of the night, judging by how often their car swerved, just enough to scare me that it might hit me. By now I was totally alert and mildly panic-y, so I decided to turn right from the St.Johns’ traffic lights towards Madhya Marg(a more crowded, seemingly safer road).

I tried to turn right from the lights but the SUV blocked my way, forcing me to go straight into sec-26.
At the next turn, I tried to turn again, but this time they went a step further; Right at the turn, they blocked the road in front of my car, and the guy in the passenger seat got out of the car and started walking towards me. I reversed as fast as I could and went straight and took the next right turn before they could catch up again.

I used this time to also call the cops at 100, and explain to them the situation and my exact location and where I was headed. The cop who answered my call, intuitively sensed the urgency in my voice, and promised me that help would be along very soon. I hung up and had now reached the main road, and hadn’t seen the SUV for about 15 seconds, so I hoped, that they’d seen me calling the cops and disappeared. I was wrong.

I was now on a straight road for about 5-6kms (Madhya Marg), and that entire time, the SUV stayed alongside my car, trying to bully me into stopping every 10-15 seconds LITERALLY. I was in a full-blown panic attack by now because they would keep trying to corner me, and I’d somehow manoeuvre my way out and keep moving. My hands shaking, my back spasming from fear, half in tears, half bewildered, because I didn’t know if I’d make it home tonight.
Who knew when, or if, the cops would show up. These guys INCESSANTLY bullied me all the way to Solitaire(end of 6kms), and at the traffic lights, blocked my car for the final time. This time they meant business, because they left me absolutely no space to move or escape, and the passenger JUMPED out of the car and moved towards mine. I don’t know how, but I reversed my car and moved to the right where there was space, all this while constantly honking so the few vehicles around would know something was wrong.

At this point, the guy had reached my car, banged loudly on my window, AND TRIED TO OPEN THE DOOR HANDLE!
Just as he did this, I saw a PCR pull up at the lights, quite possibly in response to my call. They heard me honking, and saw the SUV swerving left and right in an attempt to block me, and a couple of cops ran out towards the SUV, nabbing it just in time, because they were blocked in by traffic.

I, still shaking from fear, drove straight home, and told Virender Kundu what happened, getting him back with me to file the complaint. The 2 boys, who of course, are from influential families with political connections, have been arrested and the complaint has been filed. At the risk of sounding redundant, I need to mention and thank Chd Police again because had it not been for their timely response, I might not be writing this status today.
If this is what women deal with in one of the safer cities in the country, where are we going?

I find it shocking, that in a place with cameras at every light and cops every 200 metres, these boys thought they could either get into my car, or take me into theirs, just because they’re from an influential background.
I’m lucky, it seems, to not be the daughter of a common man, because what chance would they have against such VIPs?
I’m also lucky, because I’m not lying raped and murdered in a ditch somewhere.

If this can happen in Chd, it can happen anywhere.
LADIES! Please be proactive about your own safety;
NOTE THE NUMBER OF ANY VEHICLE THAT TRIES TO HARASS YOU.
DON’T BE AFRAID to call the cops, The minute it starts!

Call your parents, if possible, and let them know where you are and the situation you’re in.
Try and run away, in the safest way possible.
YOUR LIFE IS PARAMOUNT! If he walks towards you, use whatever you can as a weapon.
I was never a big fan of weapons, till last night. Whether it’s a gun or mace or taser or a golf club or a knife, it’s going to make you feel safer and more confident.
STAY SAFE, LADIES!

The police must be appreciated here for their prompt response and reaching out to the needy before the situation could get out of the hands. They also did an excellent task by getting the kidnappers’ medical done and informing the media about the incident so that no political influence can compromise the basic safety every girl deserves.

You can directly watch the video here

Continue Reading
You may also like...
Related Topics:Chandigarh, India