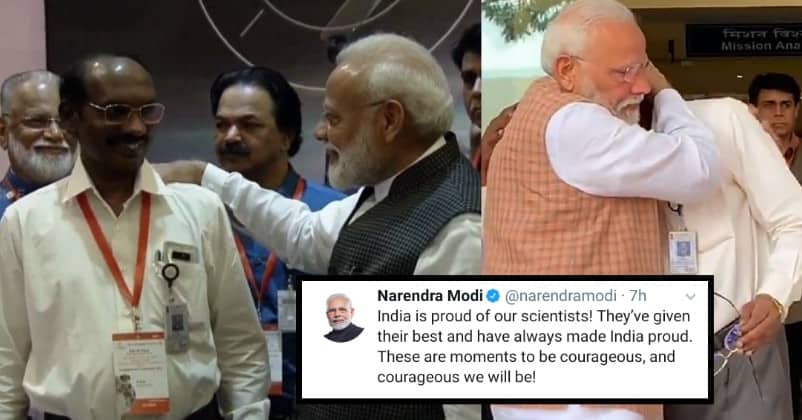 Chandrayaan-2’s Vikram lander was just about 2 kilometers from the Moon’s surface when the Indian Space Research Organisation (ISRO) lost contact with the rover. While we still have hope that Vikram is still out there somewhere and connection will be established soon, the whole nation came out in support of the scientists who gave up their sleep for this mission. People from around the country poured their congratulations for ISRO and the Chandrayaan 2 team.

PM Narendra Modi who was at the space center to witness the safe landing on Vikram with some school kids and the scientists was among the firsts who showed his support to the team.

India is proud of our scientists! They’ve given their best and have always made India proud. These are moments to be courageous, and courageous we will be!

Chairman @isro gave updates on Chandrayaan-2. We remain hopeful and will continue working hard on our space programme.

ISRO’s achievement with getting Chandrayaan-2 so far has made every Indian proud.

India stands with our committed and hard working scientists at @isro.

My best wishes for future endeavours.

Congratulations to the team at #ISRO for their incredible work on the Chandrayaan 2 Moon Mission. Your passion & dedication is an inspiration to every Indian. Your work is not in vain. It has laid the foundation for many more path breaking & ambitious Indian space missions. 🇮🇳

My dear @isro scientists, your courage is unparalleled. I am reminded of Atal ji’s beautiful poem…..

End is not the end, in fact END means ‘effort never dies’

If you get no as an answer, remember NO means ‘next opportunity’

So let’s be positive”

It was indeed a proud moment for India when everyone was waiting for Vikram to land on Moon and take its course. Due to some unfortunate turn of events, they never get to witness it. But that doesn’t make us any less proud. Netizens posted encouraging tweets for ISRO.

Thank you @isro you have made us proud. #ProudIndian #ProudOfISRO . Soft or crash landing doesn't matter #Chandrayan2 . It was an awesome experience to witness it.

"Failure is a delay not defeat; a temporary detour not a dead end"

Proud of our Indian scientists, we shall overcome

This is just a bend, not an end.#Chandrayan2 debris will always make us proud on the south pole of the moon.#ProudIndian #ProudOfISRO #ISROMissions

Happy and proud to be an INDIAN 🙏 #Chandrayan2 #Chandrayaan2 #ProudIndian #ProudOfISRO

Great efforts @isro.. Whole nation supports you…. The dedication of all the indian space scientists is at the peak…. 🇮🇳🇮🇳#ProudIndian#Chandrayan2

It's not the destination, But the efforts with sheer determination & zeal to reach there, which counts mainly.
We might have left short by just 2 kms out of 3,84,400 kms, But this 2 km will give us the fire to do the impossible.#ProudISRO #Chandrayan2 #ProudIndian

Yes, ISRO we are proud of you. It’s not a failure, just the success delayed. Only the connection is lost, not our hopes.