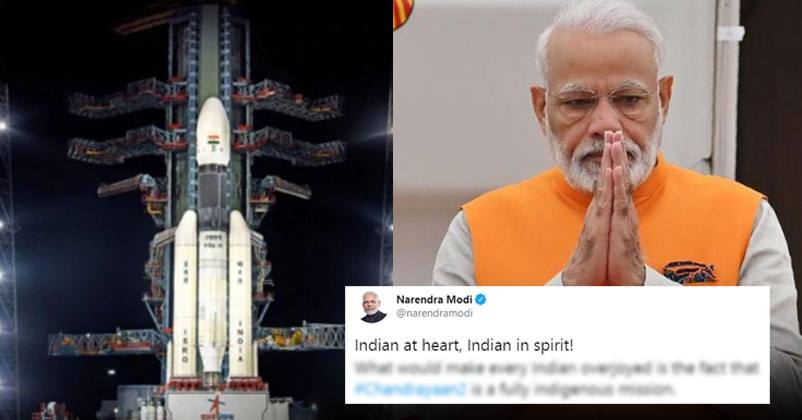 Today is a historic day for all the Indians as the scientists at ISRO have successfully launched the Chandrayaan-2 from Satish Dhawan Space Centre at Sriharikota in Andhra Pradesh. This mission is of a great importance for not just India but also the world as it will help us in knowing more about the Moon.  Geosynchronous Satellite Launch Vehicle Mark III (GSLV Mk III) has been used for launching and it consists of lunar orbiter, lander and rover which have been developed in India only.

This is India’s second mission to the Moon as the first one was Chandrayaan-1. Chandrayaan-2 was supposed to be launched on 14th July, 2019, but due to a technical glitch, the mission was aborted just one hour before the launch.

The Indian Prime Minister Narendra Modi and many ministers of the government took to the micro-blogging site Twitter to congratulate the scientists at ISRO and they were joined by common public as well as the celebrities from various fields such Bollywood, sports, etc.

Special moments that will be etched in the annals of our glorious history!

The launch of #Chandrayaan2 illustrates the prowess of our scientists and the determination of 130 crore Indians to scale new frontiers of science.

Indian at heart, Indian in spirit!

What would make every Indian overjoyed is the fact that #Chandrayaan2 is a fully indigenous mission.

It will have an Orbiter for remote sensing the Moon and also a Lander-Rover module for analysis of lunar surface.

#Chandrayaan2 is unique because it will explore and perform studies on the south pole region of lunar terrain which is not explored and sampled by any past mission.

This mission will offer new knowledge about the Moon.

Efforts such as #Chandrayaan2 will further encourage our bright youngsters towards science, top quality research and innovation.

Thanks to Chandrayaan, India’s Lunar Programme will get a substantial boost. Our existing knowledge of the Moon will be significantly enhanced.

I salute @Isro scientists for making India a space super power by successfully launching #Chandrayaan2. I wish the mission a grand success.

Many congratulations to @ISRO and its women led team that made the ambitious moon mission #Chandrayaan2 launch a reality, bringing India closer to become the fourth country in the world to soft-land a spacecraft on the lunar surface. pic.twitter.com/cMY3GpiO5V

#ISRO has yet again accomplished a mammoth feat. Salute to the team who have spent countless days ensuring the success of #Chandrayaan2 @isro

Many congratulations to Team #Chandrayaan2 @isro for the successful and seamless launch ! pic.twitter.com/LINKS5ZHUk

What a beautiful sight. Proud moment for the nation on the launch of #Chandrayaan2 @isro pic.twitter.com/8dCRwJSiSm

Meanwhile some Twitter users used this opportunity to take a dig at Pakistan and NASA and have fun.

So Dear Pakistan,
You keep on trying crossing the LoC as we again crossed the limits of Sky..!!

CONGRATS INDIA, ISRO and P.M. Modi for this massive accompalishment .Here is what Pakistan prime minister has to say about chandrayaan -2 #Chandrayaan2 #Chandrayan2 #Chandrayaan2theMoon pic.twitter.com/I9gn39Icgn

Eagerly waiting for Chandrayaan-2 to land on the Moon so that we get to see some photos and know more about the Moon.