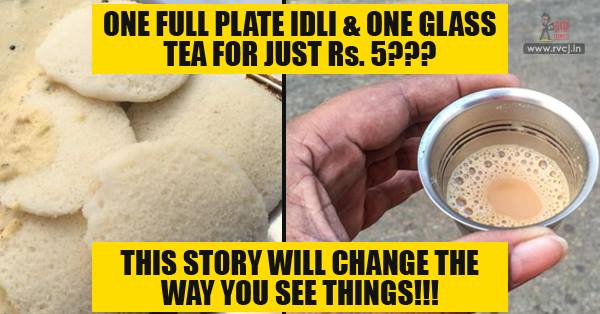 INDIA- A place where people with emotions exist, place which is known for it’s beautiful culture. But hold on, you would also find people who believe in humanity irrespective of your country or religion. This is a inspiring story of Deelip Menezes who was spell bound when he experienced something which would leave anyone in awe.

Here is inspirational story and pics that he posted on his Facebook profile:-

While riding early morning from Narsipatnam to Lambasingi I stopped at a village for breakfast. There was a table set out outside a hut along the village road and an old man was making tea. I asked for a cup of tea and something to eat. The old man pointed to the tea and then said something in his local language that I didn’t understand. I made the sign for food and he turned to his wife who was standing close by. She pointed me to a bench outside their hut, asked me to sit down and went inside the hut. After a few moments she emerged with a place of idlis and chutney which I enjoyed along with the tea. After I was done I asked the old man how much I owed him and he replied with “5 rupees”. I knew I was in one of the most backward areas of India, but 5 bucks seemed too less for a plateful of idlis with chutney and a tea. I showed my astonishment using sign language and the old man pointed to the tea once again. I pointed to the empty plate of idlis and his wife said something which I again didn’t understand. But it seemed that they were charging me only for the tea. I protested and pointed to the plate once again and they both smiled at me. That was the moment I realised that theirs was merely a tea stall and they had given me some of their own breakfast, which meant there would be less for their family to eat that morning.

I stayed quiet for a moment as I wrapped my head around what had just happened. I then reached into my wallet, took out some money and handed it to the old man. He refused to take it, but I insisted and after some pleading he finally gave in. As I rode up the ghat to Lambasingi I couldn’t stop thinking about the old couple and the life lesson I learned from them. You haven’t truly given until you have given till it hurts. Do share this story with your friends. If you have any such story to share then mention it in comments section below 🙂

Twist Pe Twist! No One Thought This South-Indian Wedding Would End Up This Way!
This Air India Staff Was Caught Red Handed Stealing, What She Stole Will Make You ROFL?