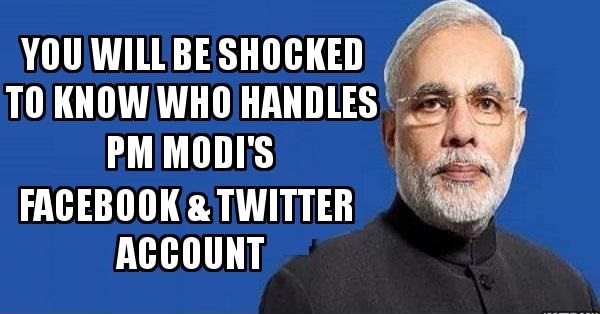 One might always be pondering whether Prime Minister Narendra Modi handles his personal social media accounts or not. But according to answers provided by Prime Minister’s office (PMO) replying to the queries of Right to Information Act (RTI), it is very clear that PM Modi himself posts and tweets the content from his personal Facebook and Twitter accounts.

Narendra Modi who won the 2014 general elections with a thumping majority, handles his own Twitter account which has over 16.8 Million followers and also posts from his Facebook Page which has around 31.5 Million Likes. Whereas the official Prime Minister’s Office accounts of Facebook and Twitter are controlled by PMO itself.

While it is hard to believe that PM himself handles his personal accounts given the busy schedule of Modi. For instance the social media accounts of POTUS (President of the United States) Barack Obama are handled by “Organizing for Action Staff”. It is also worth mentioning that Prime Minister Modi tweeted and posted on Facebook during his China visit where Twitter and Facebook are strictly banned. Answering other queries from the RTI act, PMO replied that Modi didn’t receive any smartphone from his office. Which means the IPhone spotted in Narendra Modi’s famous selfies is either bought by the PM himself or was gifted to him. Answering another query to What is the Internet speed of PM’s Office?, PMO replied the Internet speed of the Prime Minister Office is 34Mbps.

What do you think about the Internet Speed of PM’s Office? Share Your views in the comments section below.