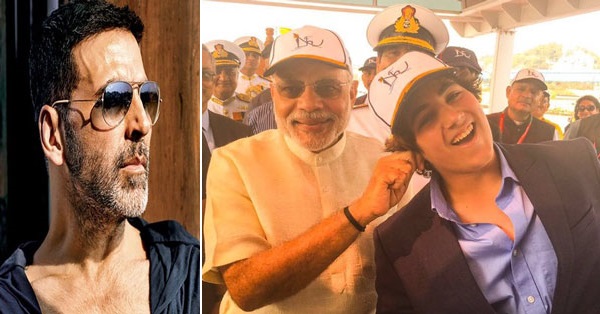 International Fleet Review was going on in Vishakhapatnam and among notable personalities, there were also a few celebs from B-Town! Yes, you read that right! A Bollywood family also attended Navy’s strength of show and they were none other than Akshay Khiladi Kumar, Twinkle, his wife and Aarav, their son.

While Navy Personnel gave the guard of honor to PM Narendra Modi and the President, Akshay’s son Aarav was the “good boy” for PM Modi as he was dressed like a young Navy officer in blazer and trousers.

A photo was shared by Akshay on Twitter in which Modi can be seen pulling ears of Aarav:

Proud moment in a father's life, when the Prime Minister pulls your son's ear in jest & calls him a good boy 😉 pic.twitter.com/0NWRyDtWh6

For the proud mother Twinkle, the pic was ‘more than a 1000 words’:

When a picture is truly worth a thousand words.. #BigMoment https://t.co/WCXzdlaK52

On Thursday, the Second International Fleet Review started and it will go on for five days in which 50 countries will participate with 99 ships, 24 foreign warships and 4000 sailors.

Indeed, every parent feels proud when their kids get praised or applauded for something and when this appreciation comes by a renowned dignitary, there can be simply no limit of their happiness and excitement!

Some Unknown Facts About Safa Baig, Better Half Of Indian Cricketer Irfan Pathan
This Is By Far The Best Latest Troll Available On Google