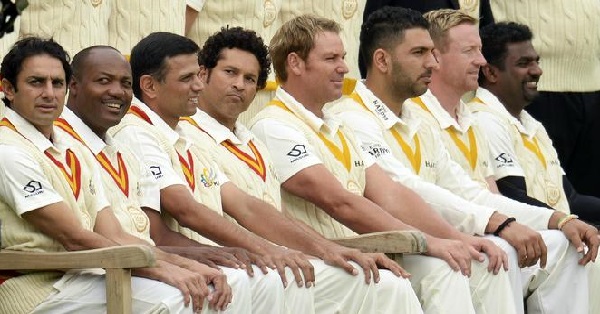 In an attempt to take up cricket to the non-playing nations like America and many others countries across the Globe, Sachin Tendulkar and his arch rival Aussie great Shane Warne has started a T20 Cricket Tournament named Cricket All Stars which consists of 3 T20 matches played one each in New York, Houstan and Los Angeles on November 7th, 10th and 12th respectively. The eligibility criteria for this Tournament is one should have retired from all forms of Cricket including IPL. The Tournament consists of 30 Retired cricketers divided into two teams namely Sachin’s Blasters captained by Sachin Tendulkar and Warne’s Warriors headed by Shane Warne. The Tournament consists of big names like Sachin Tendulkar, Shane Warne, Sourav Ganguly, Virender Sehwag, Ricky Ponting, Brain Lara, Wasim Akram, Mathew Hayden, Kumar Sangakkara, Jacques Kallis and many more. But much to the suprise of Indians Rahul Dravid isn’t a part of this Tournament. Due to this Social Media is buzzing with lot of speculations and rumours on Why Rahul Dravid isn’t a Part of this Tournament? Beside all those rumorus , Here is the actual reason for the absence of Rahul Dravid for this much awaited tournament. Rahul Dravid was appointed as the National Coach of India Under 19 and India ‘A’ teams in June. Also Rahul Dravid is keen to mould the Future Talent of India with this role. This is the reason for Rahul Dravid not featuring in the much awaited star studded tournament. He is also looking forward to the Under 19 Cricket World Cup which is scheduled to start on 22nd January 2016 which is just a couple of months ahead.

So don’t believe in all those Social Media speculations giving the false information. Even though we miss him in this Tournament He is busy in doing what he loves the most, shaping the Future of Indian Cricket. Let’s take a second to wish him All The Best. 🙂

Sachin’s Response To Sourav’s Threat Is Just Awesome – Can’t Miss To Check Out
I Can Buy My Own IPL Team, If There Is No Team To Play For In IPL 2016 : MS Dhoni