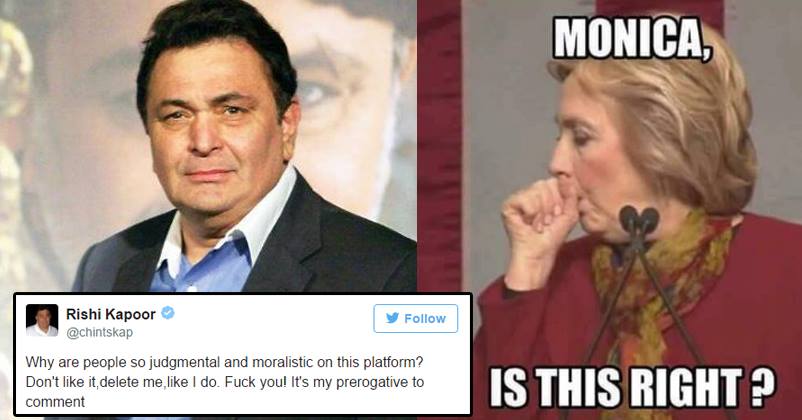 We all know that Chintuji is extremely fond of Twitter. For him, this social media platform is mainly for sharing observations and giving out opinions. Sometimes, he has a tendency of sharing random thoughts that come to his mind. Fans love his laughter dose, but this time he has tweeted something immature. See what he tweeted;

History being checked! Tx for it ABjr. If it wasn't RIGHT,it would have LEFT a bad taste pic.twitter.com/p6MmEnC5uh

Failed to understand? Well, Rishi Kapoor is referring to Monica Lewinsky, an intern at Whitehouse, who was believed to have a physical relation with Bill Clinton, due to which his President job was at risk. However, as soon as Rishi Kapoor tweeted this meme of Hillary Clinton coughing (Double meaning) with a sexist remark, he received a lot of criticism from Twitterati! Have a look at the reactions….

or as woman. Have some respect for Mrs Clinton.

Imagine if it was your family member in the meme!

;This is in pretty bad taste.Try doing a similar one for Modiji and then see the fun

not expected from u sir..

How many pegs down?

how many pegs down? U dont seem to b getg bj it seems

You are so sophisticated that i just hit *Unfollow*

Cheap! You are Cheap!

What if the same is done with Ranbir, Deepika or Katrina!

sir lets do a similar meme of Ranbir,Katrina and Deepika. Will u still find it funny?

Sir trust me, Just replace hillary's face with neetu singh's n 'monica' with 'Dimple' and it becomes even funnier.

As soon as Chintuji saw all these comments, he too became furious and sought explanation! He says;

Why are people so judgmental?

Why are people so judgmental and moralistic on this platform? Don't like it,delete me,like I do. Fuck you! It's my prerogative to comment

I commented on Trump too..

I commented on Trump and so I did on Hillary.You don't like it,delete me. My forum is a fun one. Lots tweet on me being drunk.That's sad!😪

So guys, what do you have to say about this remark passed by Rishi Kapoor? Do let us know your comments in our comments section below!

Want To Invite Bollywood Stars In Your Wedding? This Is What You Have To Pay For These Actors
10 Actors Who Went Too Far For Their Role