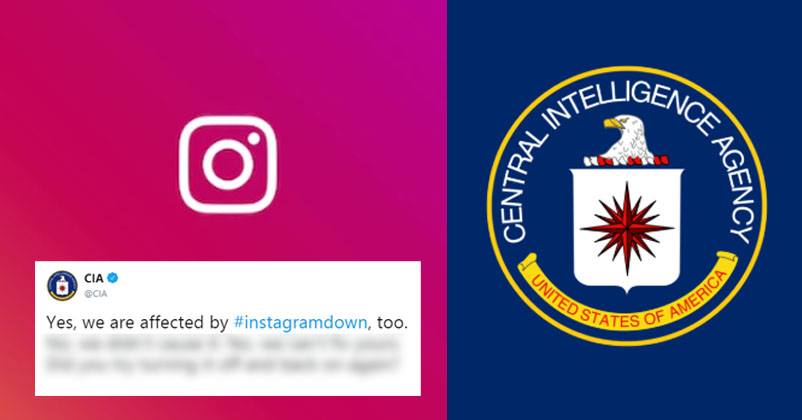 Instagram, Facebook, and WhatsApp seemed to be down for many users across the world yesterday. People started freaking out and making memes, because why not? People took to Twitter ( which was fortunately spared) and posted their disappointment and made fun of the apps. But one tweet, in particular, caught a lot of attention.

CIA, Central Intelligence Agency posted a witty tweet which took everyone by surprise. They posted a tweet, saying that this also has affected them and that they did not cause it! They said, “Yes, we are affected by #instagramdown, too. No, we didn’t cause it. No, we can’t fix yours. Did you try turning it off and back on again?”

Yes, we are affected by #instagramdown, too. No, we didn’t cause it. No, we can’t fix yours. Did you try turning it off and back on again?

People could not believe that they actually posted something funny!

Ha, who knew @CIA had jokes.

Forgot I followed you. You don't say much, do you?

I think I just fell in love with your account😂

I was about to tweet something snarky at you all, but then I realized you could probably tell me what song I’m listening to right now and decided against it.

The CIA definitely got us!

Amul Salutes Rohit Sharma For Being The First Indian To Score 4 Centuries In The World Cup
Avengers: Endgame Extended Version Is All Set To Hit The Theaters In India