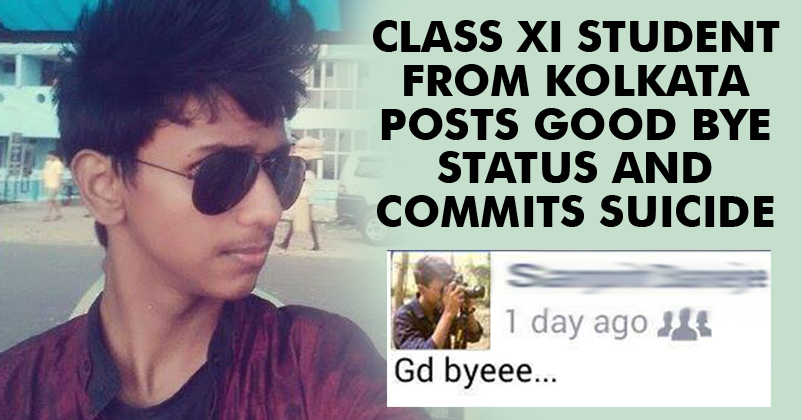 Nowadays, students have immense pressure; be it about love life or be it about be it about their studies. Students are mentally harassed to score good in exams and in a bid to do that, they are EXHAUSTED. Don’t the teachers realize that it weakens them emotionally? Secondly, weak students are always humiliated by teachers, which further adds to disappointment.

Today, we’ll share an incident with you which will shock you to death! Well, on Wednesday a 11th class student named Samprit Banerjee updated his Facebook status as “Goodbye” but none of his friends realized that he was actually bidding a goodbye to his life. The very next day, he was found dead in his residence in Kolkata’s Paschim Putiary! Yes, he actually hanged himself! This was because his accounts teacher used to constantly humiliate him for poor performance in half-yearly exams.

Even Samprit’s mom blamed the accounts teacher; she said

“The accountancy teacher used to hit and make my son stand holding his ears in class. He is a teenager and it is a co-education school. He would find it very humiliating. He was so terrorized by the teacher’s punishment that he had stopped going to school on Wednesdays and Fridays because he had accountancy classes.”

Another classmate of Samprit stated that he was badly beaten when he asked the teacher why he got such less marks.

He even compared his marks with other students who scored high percentage in spite of writing the same answers. This made the teacher very furious and he immediately asked Samprit to leave the class. This was sheer humiliation for Samprit and he was very disappointed.

After not being able to tolerate this embarrassment, Samprit posted his last status on Facebook and ended his life! This is really shocking! It’s high time our education system realizes the pressure on students and take the necessary steps. What’s your view on this? Do share in our comments section below!

AR Rahman Fasting In Support Of Jalikattu! What’s Your Take?
Jio In Trouble! After Airtel, Idea Has Challenged TRAI For Extension Of Jio’s Offer!