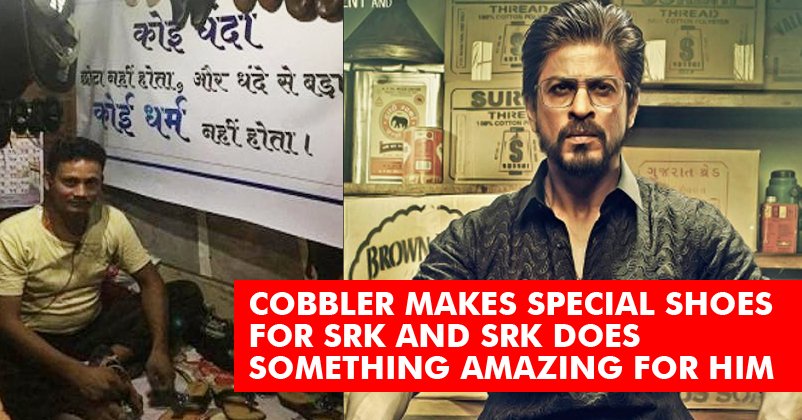 Shah Rukh is undoubtedly Baadshah of the Bollywood industry with countless fans who have, time and again, shown that they go out of the way to do something extraordinary for their idol. Often we have seen fans doing crazy things for the “Dilwale” actor who also never disappoints his fans and has always been quite humble and thankful towards them. Once again, a fan has done something which moved SRK to such an extent that he couldn’t stop himself from meeting him. Yes, that’s right! This fan is a cobbler by profession and the motto of his business is, surprisingly, a dialogue from “Raees”, the upcoming flick of Shah Rukh.

Recently, a photo circulated over web and social media featuring the cobbler Shyam Bahadur Rohidas, commonly known as Raju. However, the special and noteworthy thing about this picture was the banner which had a line of SRK starrer written on it, “Koi dhanda chota nahi hota aur dhande se bada koi dharam nahi hota.” Needless to say, this dialogue had a deep impact on the mind of Raju and that’s why, he made it the motto of his profession. When Shah Rukh got to know about this fan, he had a tryst with him and in this meeting, his cobbler fan gifted him a handcrafted pair of shoes which SRK accepted happily.

“Mujhe Shah Rukh Khan bhai ka baat bahut accha laga. Yeh mere dimag mein baith gaya,” said Raju in a media interaction. Not even for a moment did Raju think that he would get to meet Shah Rukh because of this pic. He was undeniably overwhelmed on meeting SRK, as he said, “Main abhi sabko bolunga ki hum ne woh line tumhari dukaan se li hai.”

SRK is very touched with this gesture of his fan and says that he will wear the gifted pair of shoes with the pathani next time. In his words, “I am really touched that the message from the film — which perhaps is a little more convoluted than how Raju has taken it —has reached out to people. I hope everyone understands that we should respect people in whatever job they are. I am really happy that he has made this pair of shoes for me. I will wear them with the pathani next time.”

King Khan never thinks that any work is small as he says,

“I am a big believer in dignity of labour. I have maintained that in my house also — right from the very small things, to the very big things, I do them all myself. I think every job is amazing. When done with dignity, any job can get you the maximum amount of success and happiness.”

That’s definitely a wow moment for the cobbler fan of SRK!!

Kaabil & Raees Are All Set To Clash! Hrithik Once Again Spoke Up About The Clash & Said….
Zaira Wasim Hit Out At Sports Minister Vijay Goel For Comparing Her With Woman In Hijab