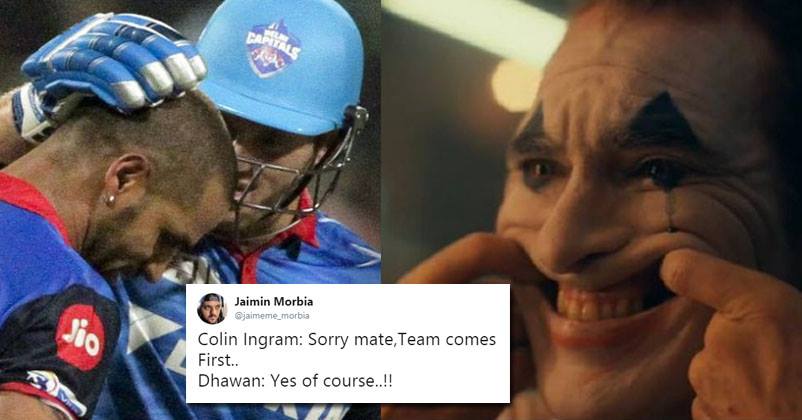 In a nail-biting match yesterday, the home team Kolkata Knight Riders lost at Eden against Delhi Capitals by 7 wickets. Shikhar Dhawan the left-handed batsman beautifully chased the runs and ensured DC can stay at par the run rate. Dhawan scored a whopping 97 runs off 63 balls unbeaten with 11 fours and 2 six.

Well, the fans were not pleased with Dhawan not being able to score his IPL maiden century. In the last two final over Delhi needed 12 runs. As there was a chance for Dhawan to take the winning strike and score his first maiden 100 of this season of IPL.

Shikhar Dhawan was deprived of a century by Colin Ingram’s winning shot heroics 🤔 Inconsiderate, in my opinion – Shikhar deserved a 💯 for putting Delhi on top of KKR #KKRvDC #KKRvsDC PC:delhicapitals pic.twitter.com/hSqudeOrto

Alas, Ingram became a barrier and smashed the winning six leaving Dhawan stagnant on 97 runs as DC required 5 runs off to win and Colin did it for the team.

Dhawan played a magnificent inning and the champ was celebrating the victory of the team and appreciating Ingram for the match-winning six.

The fans didn’t appreciate the fact that Ingram didn’t let Shikhar take the winning strike and started trolling Colin with memes on the social media :

Shikar Dhawan probably feeling like this after Colin Ingram hits that 6 and strands him on 97*#KKRvsDC #kkr #IPL pic.twitter.com/CqT0HHkNjb

Shikhar Dhawan was deprived of a century by Colin Ingram’s winning shot heroics 🤔 Inconsiderate, in my opinion – Shikhar deserved a 💯 for putting Delhi on top of KKR #KKRvDC #KKRvsDC PC:delhicapitals pic.twitter.com/hSqudeOrto