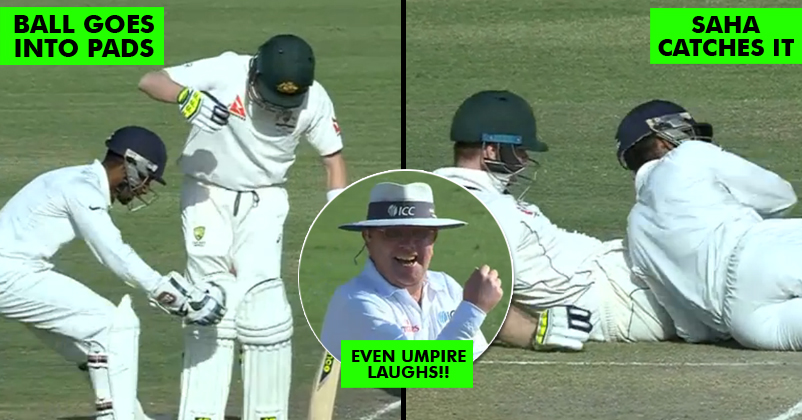 There have been many controversies surrounding the India V/S Australia Border Gavaskar trophy; today, the match was in Ranchi and a very funny incident happened, which left the viewers in splits.

Well, Australia won the toss and elected to bat; everything was going well, as the team scored 299/4, with Steve Smith scoring a century (117*) and Maxwell scoring 82*.

The 3rd over of the 80th over has left the fans giggling. Yes, it was sort of a “Wrestling” match between Smith and Indian wicketkeeper Wridhiman Saha. The collision that took place between the duo was hilarious; even the umpire Ian Gould couldn’t control his laughter. It was Ravindra Jadeja who was bowling; the ball took an inside edge and got stuck in Smith’s pads. Forget that; Saha took this as a good opportunity and made attempts to pull out that ball, LOL! What was the result? Well, they both tumbled down, making the viewers go ROFL.

Saha even appealed to the umpire, but he was busy laughing. It was nothing but a “Dead ball”, but it surely gave a good laughter therapy to everyone present there.

Do you also want to laugh a little? If yes, then watch the video here:-

It was a funny incident though. Share it with your friends and let them have some laugh too!

Virat & Anushka Have A Special Holi Message For All & It’s Damn Meaningful!
Are You Good At Fielding? BCCI Just Posted A Vacancy For Short Leg Fielder & Here’s How You Can Apply!