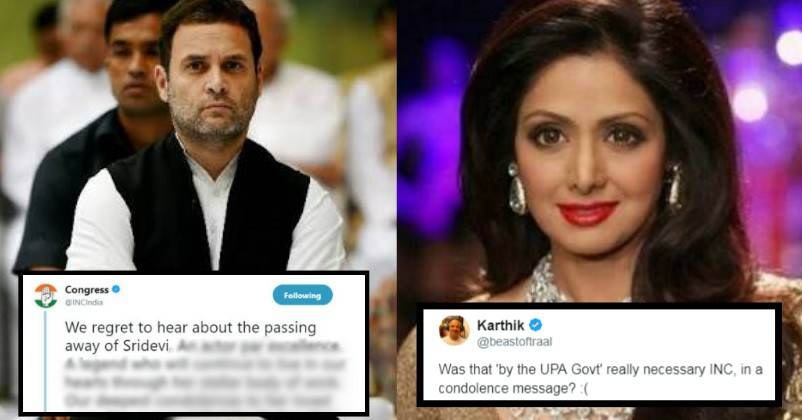 On Saturday night, the Indian cinema lost one of its most beautiful and talented gems Sridevi who took her last breathe in Dubai. She was 54 and the reason for her untimely death is cardiac arrest.

The nation is in a state of shock as it is difficult to believe that we will not be able to see Sridevi anymore. Many politicians, celebrities and common people have taken to Twitter to outpour feelings of grief and distress. 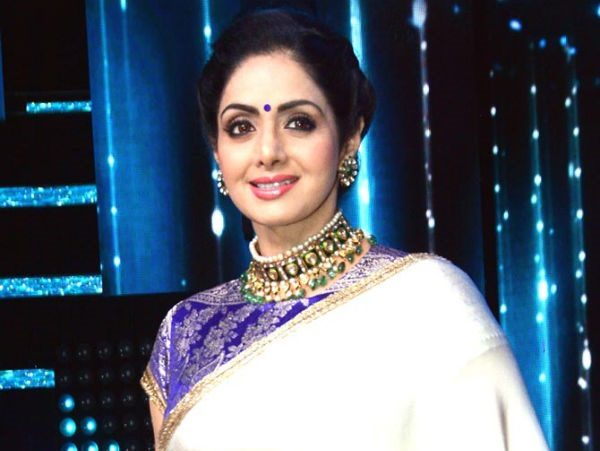 The official Twitter handle of Congress also paid its tribute to the actress and wrote,

“We regret to hear about the passing away of Sridevi. An actor par excellence. A legend who will continue to live in our hearts through her stellar body of work.

Our deepest condolences to her loved ones. 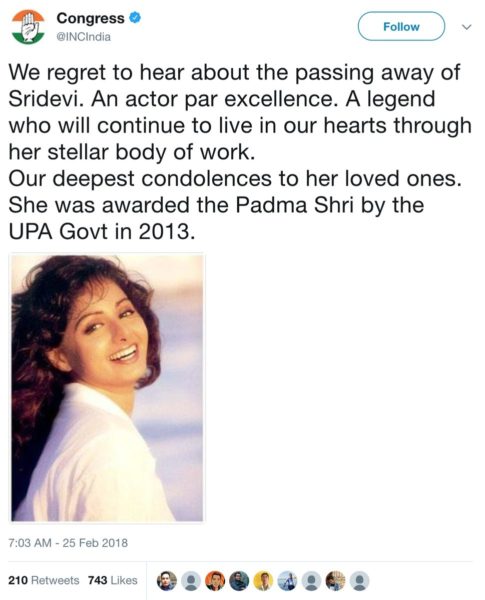 However, what didn’t go well with Twitterati was that Congress tried to praise itself by telling that Sridevi was awarded with Padma Shri by UPA government in 2013. People started trolling Congress, accusing the party for giving a political angle to the death of the actress.

The humility of @INCIndia . It did not take credit for Sridevi living, eating and breathing in Congress ruled times. pic.twitter.com/wBx6WfPHQJ

Was that even necessary?

Was that 'by the UPA Govt' really necessary INC, in a condolence message? 🙁 pic.twitter.com/BkgrYEKYCh

Seriously? Was the UPA bit for giving her a Padma Shri really necessary in a condolence message. What kind of idiots are you guys

Dear @OfficeOfRG you make an award sound like a favour granted. More importantly, #PadmaAwards is an honour given by the country (hence, @rashtrapatibhvn) to its citizen – not by any political party. Shows Congress' sense of entitlement. By this tweet you have insulted #Sridevi

What nonsense is this @OfficeOfRG . Is it your idea that she was awarded Padma Shri by UPA Govt. @INCIndia is a party full of duffers. For Your information, You are a freeloader & can never even dream of achieving what she has achieved in her life. Om Shanti. @rssurjewala

"She Was Awarded The Padma Shri By The UPA Govt In 2013". Are You Serious? Is That Line Even Necessary To Pay Tribute To A Legendary Actress? Please Stop Politicising The Death. You Guys Are Disgrace To Humanity. Shame On You Congress. #Sridevi #RIPSridevihttps://t.co/gdPHFEIWE4

Also mention, she was born when Nehru was the prime-minister.

I would not be surprised if they extend… she was alive when indira and rajiv were prime ministers but died in modi govt. Shameful.

Later, the tweet was edited by the Twitter handle of Congress and the line which spoke about the Padma Shri award was deleted.

We regret to hear about the passing away of Sridevi. An actor par excellence. A legend who will continue to live in our hearts through her stellar body of work.
Our deepest condolences to her loved ones. pic.twitter.com/RPagwsnX9h