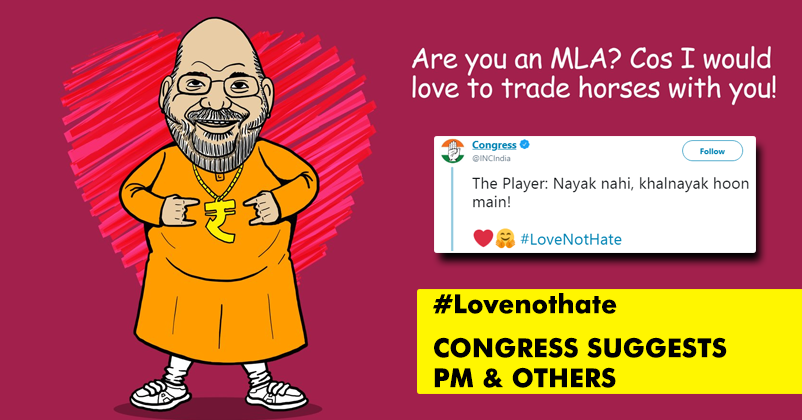 On Valentine’s Day, Congress had a special gift for BJP and all its ministers. With the hashtag, #LoveNotHate, Congress very sweetly tore down each member of the BJP till they were reduced to nothing but memes and cartoons.

Now, BJP could not even retaliate, because each post was captioned with hugs and heart signs. The Congress social media team seems to have taken its cues from Rahul Gandhi’s strategic jhappi a few months back.

For Modi, the Congress titled him The Accidental Chowkidaar. Ouch, the tongue in cheek humour in this meme has us rolling on the floor with laughter. Chori chori, chupke chupke. *Slow claps*

Defence Minister Nirmala Sitharaman’s caricature took a jibe at her faux pas during the Rafale controversy when she made it obvious that her party had been lying.

The Silencer: You say it best, when you say nothing at all!

Piyush Goyal’s meme was the funniest. A few days ago, he made an unforgivable social media error when he uploaded an edited image of the speeding Vande Mataram Express. Obviously, Congress made most of the opportunity.

For the past year, Yogi Adityanath has had only one mission. To rename states and cities. And that basically became a national meme. How could Congress be left behind?

This one must have heard. Congress took a direct jibe at Smriti Irani’s degree fiasco.

Sweet? Not so much. The Congress’s jibes may have been accompanied by heart emojis, but they’re downright savage. And we’re pretty sure, BJP must have been left speechless.