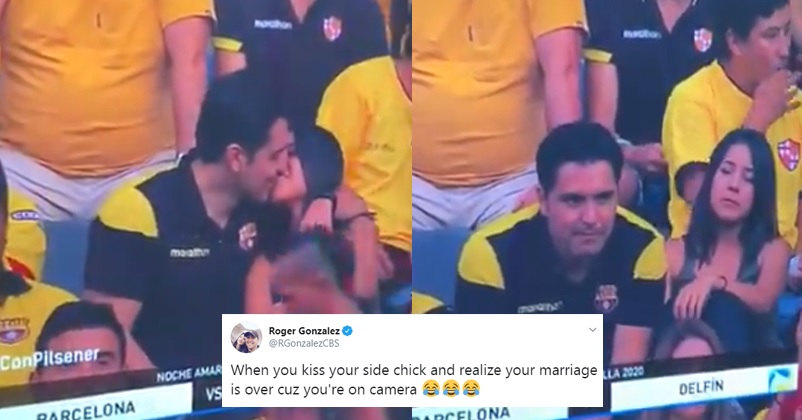 There is no denying the fact that watching a football match at the stadium has its own fun and charm but people should be cautious of their acts as many cameras are used nowadays and some of them are more focused on the audiences rather than on the field.

Many times we have seen that a lover has proposed his girlfriend during a match in front of the huge crowd. And now a video is going viral on the Internet which has left a person in a pretty embarrassed state.

A Twitter user Roger Gonzalez took to the micro-blogging site and posted the video with a funny caption that read, “When you kiss your side chick and realize your marriage is over cuz you’re on camera 😂😂😂”

The video was shot during the football match which was played between Barcelona SC Vs Delfin. In this video, a couple is seen kissing first but as they realise that they are on the camera, they immediately move apart and act as if they don’t even know each other. The highlight of the incident is the weird look on the face of the man as if he is thinking about his wife and what she will do to him if she watches him kissing the woman sitting next to him in the stadium.

This is how hilariously Twitter users reacted to the video and the man’s expression:

Anyone got the wife’s @? We have an idea for revenge

Kinda feels like this caption nailed it. #oops #ouch https://t.co/Jjkdp78aT9

The look of pure fear pic.twitter.com/bYn4VdXZ3D

I searched it, and some one commented in Spanish, that the guy shut down his twitter And Instagram… lol!..
hey!… you freakin reap what you sow… #karmasabitch👍

We wonder how the man’s condition would have been if his wife had watched the viral clip.