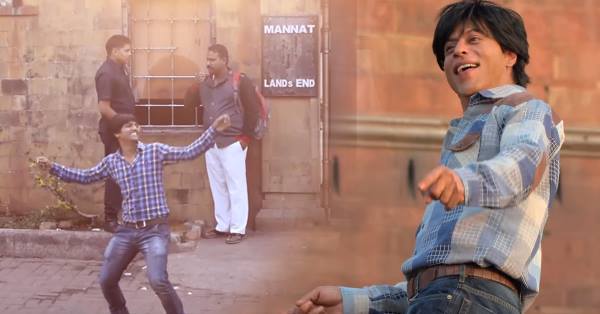 Shah Rukh Khan is not merely a Bollywood actor but a legend, a superstar whose craze is not only limited to India but spreads across the world. Even though there had been protests against him and his movies after he made “intolerance” remark with regard to the country, the actor’s fan following remained unaffected and unsurprisingly, his admirers not only adore but worship him.

The King of Bollywood rules a millions of hearts regardless of religion and on one side where there are hundreds and thousands of girls who are dying to marry him, the count of his male fans too is no less who can go to any heights of madness for their hero.

His upcoming movie “FAN” showcases the story of one such SRK fan but in real life too, there are many who leave no stone unturned to show their love for Badshah. And after the release of JABRA FAN song from the same flick, you won’t believe what this crazy fan of Shah Rukh Khan did!! Watch yourself….

Even SRK couldn’t resist himself to tweet this video:-

Kya baat hai. Thank you. Should have seen you before and done the steps. https://t.co/P7xJmya4oc

Have you met any such fan or are you the one?

Share your views about the video in the comments section below.