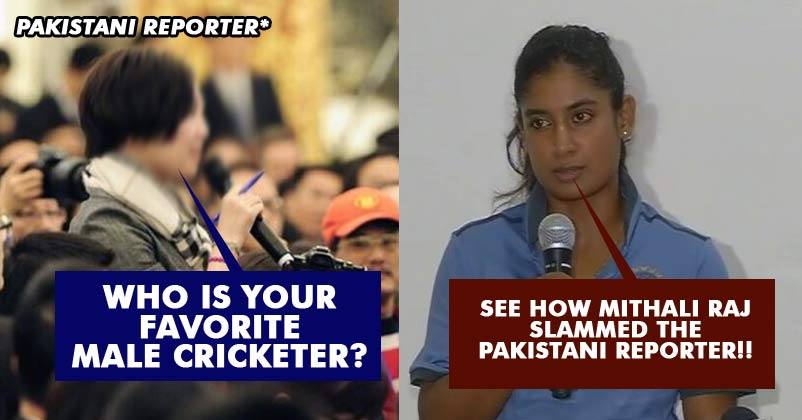 In India, there is only one sport that people love to talk about and it’s Cricket. But it’s really unfortunate that even in cricket people are only interested in the male team. No matter how strong our female cricket team is and how well they place it is the only male cricket team that excites viewers.

We are just very close to the women’s cricket world cup, but there is still no awareness about it among audience let alone the excitement. At the opening dinner and media round table event of the female world cup, Indian cricketer Mithali Raj was asked about her favourite male cricketer and the question made her furious. Angry Mithali blasted on the journalist for asking her this question. Mithali used the chance to its fullest and pointed out that the Indian women do not receive the same amount of publicity as compared to their male counterparts in a cricket-crazy nation like India.

“There’s a lot of difference because we are not a regular on television. Now the BCCI has made an effort that the last two home series have been televised and social media has improved a lot of it but there is a still a lot of catch-up to do in terms of recognition.”

Earlier this year, Tushar Arothe replaced Purnima Rau as the Indian women’s coach and Mithali admits the team has benefitted under his guidance. “Men’s cricket sets the bar. We are always trying to reach where they set the standard. All of us follow men’s cricket because we want at some point that women’s cricket would be up there.”

However, Mithali is not much convinced with the view that there is a lot of need for the women cricket team to depend on the expertise of the men’s game, especially in the coaching department.

“All of us at some point have been coached by a male cricketer. I strongly believe that they get a lot of intensity into the training sessions. They are very hard taskmasters.”

For those who don’t know, Mithali Raj is a living legend of female cricket who has represented our country at the top-most level for almost 17 years now. She has set amazing records in ODIs, with total 5781 runs at an average of 52.08 and is only the second woman to cross the 5,000 run mark. Her numbers even put some of the male cricketers to shame.

The Women’s World Cup will begin on June 24, with a match against host England in Derbyshire.

Will you watch the female world cup series?

Continue Reading
You may also like...
Related Topics:Mithila Raj

Revealed! Indian Team Used To Hate Anil Kumble For This Reason & It’s Surprising!
Kohli Finally Spoke Up On Controversy With Kumble And Fans Might Agree With Him