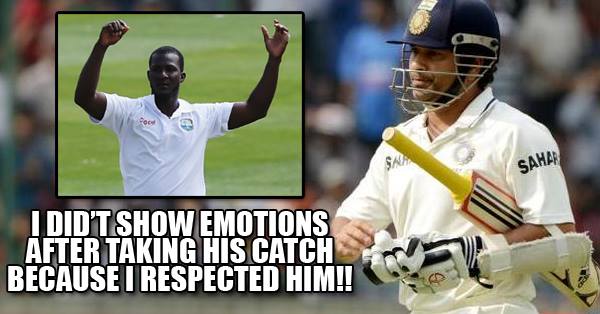 Sachin Tendulkar, the man who is considered as the GOD for all the lovers of Indian cricket is a globally respected cricketer and today we are going to let you know about an incident which will give you an idea that how lucky we Indians are, to have Sachin Tendulkar.

Sachin played his last test match against West Indies in November, 2013; he scored 74 runs in his final innings at Mumbai, before Darren Sammy took his catch on the first slip on the bowling of Narsingh Deonarine.

However, the West Indian Captain didn’t celebrated after taking Little Master’s catch and when he was asked the reason behind not celebrating; he said that the respect that he has for Sachin Tendulkar stopped him from celebrating.

This is what Darren Sammy said in the Press conference, after the match, “I took a brilliant catch to dismiss him but there was no emotion shown. That’s the level of respect I have for the man,” Sammy said. “We have utmost respect for Sachin, respect for what he’s done for the game. He is a special man but he is made even more special the way the fans treat him. I don’t think any other sportsman in any sport has gotten that type of treatment from his or her followers.

India has set the benchmark as to how you support your own son of the soil. Many great cricketers have come and gone but Sachin is one that will never be forgotten. Kids who are probably not born yet, they will grow up in India and they will hear about Sachin Tendulkar. That’s the legacy he has left behind. So, to be part of it is a wonderful experience. The cricket, we would so love to forget, how we played, but to be part of this momentous occasion is something I will never forget.”

Darren didn’t stop here, he further said, “In any sport, you have fans who support their heroes. The superstars in that particular sport, the fans turn out and support them. In Formula One, it is Michael Schumacher, in basketball you have Michael Jordan, in tennis Roger Federer, in golf Tiger Woods. But something about cricket and India and Sachin Tendulkar – throughout the series, you saw the tweets, the text messages, the comments being made. It’s hard to sink in, the measure of the man, what he represents and like I said, probably we don’t have words to describe what he means to cricket.”

Watch the video to see how much Darren Sammy respects Sachin: