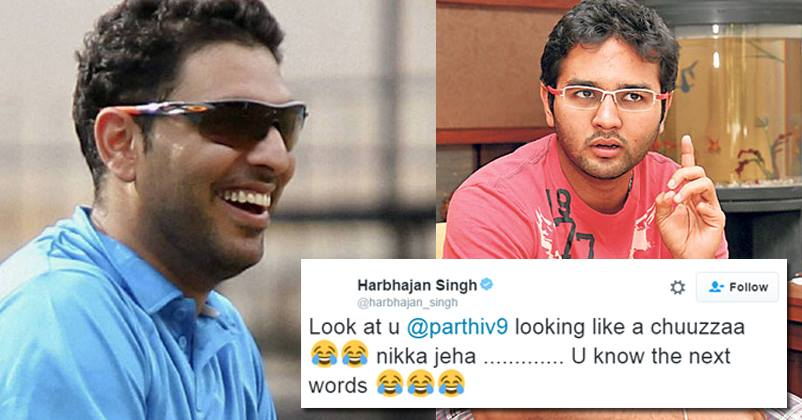 Undoubtedly, Indian cricket team has earned repute and fame worldwide for some of the most stunning performances on field but when it comes to humor and fun off the field, they are simply superb too!

Parthiv Patel, wicketkeeper batsman of cricket team of India, is frequently trolled or becomes an object of mockery for his tiny physique and other players avail themselves of this, leaving no chance of embarrassing Patel. And once again on Thursday, the same happened but this time, Parthiv too didn’t hesitate in replying candidly.

It so happened that legendary Indian spinner Anil Kumble posted an old pic of the team on Twitter:

Getting the adrenaline rush at Huka Falls and unwinding ourselves. #ThrowbackThursday pic.twitter.com/FvpcmsekDi

Bhajji soon spotted Parthiv Patel in the pic and tweeted:

And Yuvi also joined him:

Parthiv was quick to reply over this, calling Yuvraj “Chacha Ji” which made Twitterians burst into laughter! Here’s what he tweeted:

Probably no one would take a jibe at Parthiv’s short physique now!

What do you have to say about this? Share your views in the comments section below.

Fardeen Khan Slams Body Shamers With A Perfect Reply! Trollers Would Always Remember This Lesson
AB De Villiers Just Did Something Which Made Internet Crazy! Don’t Miss To Watch