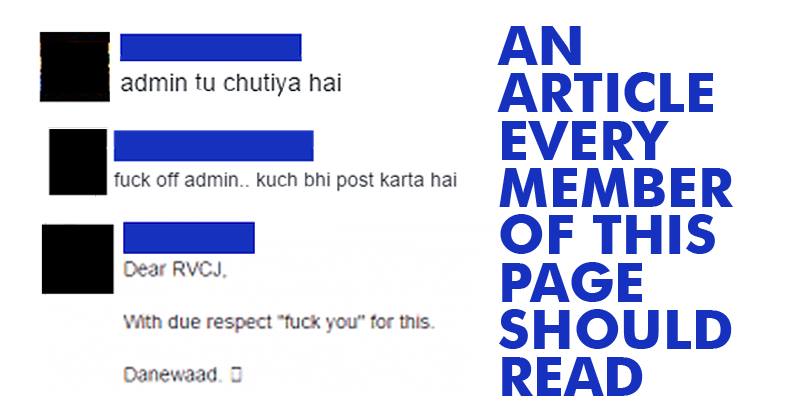 It is said that criticism is good for health. And we wholeheartedly accept it. Afterall that’s what makes us thrive more towards excellence. Recently our Facebook Page crossed a great milestone. We are a 1 Crore family now. Your love helped us come to this stage. Without you, we were and are nothing.

Now recently one of our writers, went on to write an article on Sanjay Dutt. Here is the link – Sanjay Dutt’s Wife Uploads A Controversial Pic That Could Again Land Him In Jail . Well, the article got many hits and was shared at large. If you read the article, you might have been a bit disappointed. Yes, it was just a lampstand. And people went furious.

The readers started abusing the writer in the comment section. Well, I am not defending anyone in this case. Neither the writer nor the readers. The main allegation thrown by the readers was that the writer tricked them with false article title saying that Sanjay Dutt will go to jail because of THIS REASON. But if you look closely at the article title, it said ‘COULD’ which means ‘something possible in the nearby future’. This in turn means that the writer didn’t say that he WILL land up in jail. Everything that the writer explained was all on the basis of possibilities which doesn’t mean that she was announcing the verdict ! !

But as a reader, even I was a bit disappointed as the article was quite different than what the title seemed to have suggested. But if you look the title from grammarnazi perpective, it was all okay.

Now its certainly your choice and your right to perceive anything and hold an opinion about it. But what followed next was totally disappointing. People started abusing the writer which in no way was justified. Have a look at the comments. Well, I wonder what these people had to say when our Politicians made derogatory remarks on religion, women and sensitive issues.

Well, I don’t usually go with stereotypes but abusing a guy for no good reason still seems to be ‘I don’t give PHUCKS’ kinda attitude because a guy doesn’t really bother much since he is constantly surrounded by such friends in some way or the other. But if someone abuses a girl or a woman, then this definitely makes a huge impact on her mind. If you look at her author profile she has written more than 3 thousand articles for our website. Out of which more than 1900 articles have surpassed the 6 digits view counts. Let us just assume or more over believe that the article was wrong and it was full of rubbish. But does that gives us the right to abuse someone. We are educated internet users. And if we ourselves start disrespecting women, then how can we fight the battle against the injustice done to them. Doesn’t this makes us hypocrite ?

And apart from abusing and accusing, many people complain about our posts. They say that they don’t like such Bollywood posts. Well, let me just help you understand the scenario in a much better way. It is an era SUPPLY AND DEMAND. Have a look.

This image does proves that most of our readers are indeed massive consumers of such Bollywood based articles. Since we have the demand, why won’t we SUPPLY. May be that article didn’t even deserve to be on the news column, but, as stated by the picture above, our readers are more interested in the latest happenings of celebrity’s life than knowing anything about normal person’s life.

Our RVCJ team consist of very simple people. 5 Admins who left their jobs just so as to engage with you people and provide you non stop entertainment by posting the latest happening around the world. But in the midst of doing this, they do have a life – A family. Many of us had reached an age where rest of our friends started to earn decent amount of money and believe it or not, somewhere, such things psychologically haunted us whenever we considered the fact that we were still doing nothing than just uploading jokes and memes on our Facebook page. So we started our website so that even we could earn through it and keep you entertaining as well. In order to earn and keep our lives sustained, we do need our website to work well and in order to do that we do need to write good engaging articles. No one clicks on motivational and inspirational articles, do you ? Nahhh ! ! Why will you when you have a gossip reading article on SRK vs Salman Khan’s fight. Some of our readers complain against the use of ads on our websites, little do they know that these ads are the only main source of our income which is further subdivided for the maintenance of our website, paying guest writers, meme creators and finally making a living for ourselves. Now if you look at any other news article based websites like TOI, Dainik Bhaskar, Amar Ujala, ABP News etc, you will find yourself choking up under loads of pop up ads which are more frustrating. In order to enhance our reader’s reading experience we even came up with ‘INSTANT ARTICLE’ service where the webpage loads within 1 second and the best thing about ‘INSTANT ARTICLE’ is that you get to see minimum number of ads. Many websites in the midst of getting more pageviews and clicks on their ads deliberately stretch a simple 500 words article into more than 3-4 pages. They have prioritized their earnings over their readers and users. But RVCJ is the only website which is still publishing its article in just one page so as to save your data. For us, you guys are the only backbone which helps RVCJ Page face any storm. Even this article has shooted up more than 1000 words but you are still reading it in just one single page. We bet you that you won’t find any pop ups ads on our websites other than simple google adsense ads. Here is an example of one of those websites where a mere 470 words article was spanned for over 4 pages just so as to increase their revenue.

It is a crime in our country to even think beyond pursuing engineering and doctor. It was a very hard decision for us to take the path less travelled and become entrepreneurs. But fortune favours the brave and just after 5 years later, our hard work and your love paid off. Crossing a milestone which hardly anyone of us had ever imagined. Sure, we do make mistakes, but that doesn’t really mean that you have the right to say anything to us and to our families. There was a time and even right now when each and every member from our team spends more than 14 hours for producing content for you people. For you, the content might be an entertainment for just 10 seconds and worth sharing it on your timeline with a single click, but for us, BRAINSTORMING is the correct word to produce such contents which takes more time than you can imagine for coming up with new, fresh and humorous contents. Its not just a Facebook Page for us, its our life, our hard work .

Hope you guys respect it and the people working for it ! !

Meet Chennai Super Cop Who Entertains People While Keeping Them Safe! #Inspiration
Pictures Of Michael Phelps Winning Gold Medal Made Our Users Ask About Red Marks On His Body