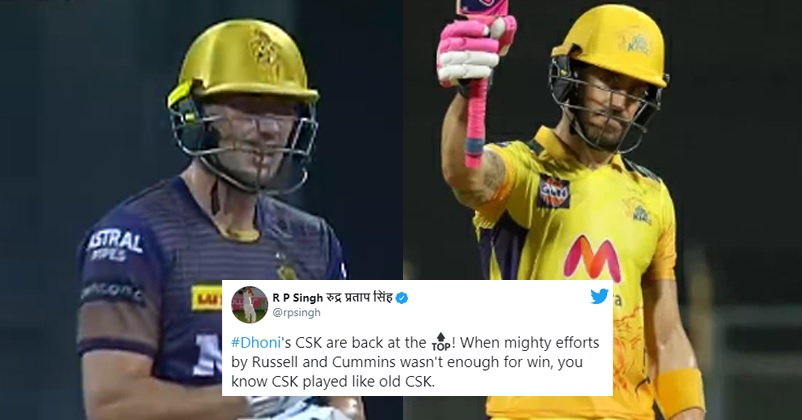 Chennai Super Kings seems to be back in their original avatar after a nightmarish IPL 2020 as yesterday they registered their third win after defeating Kolkata Knight Riders in their fourth match of the league. It was certainly one of the most thrilling matches ever played in the tournament as the fortunes were swinging both ways on a regular basis. 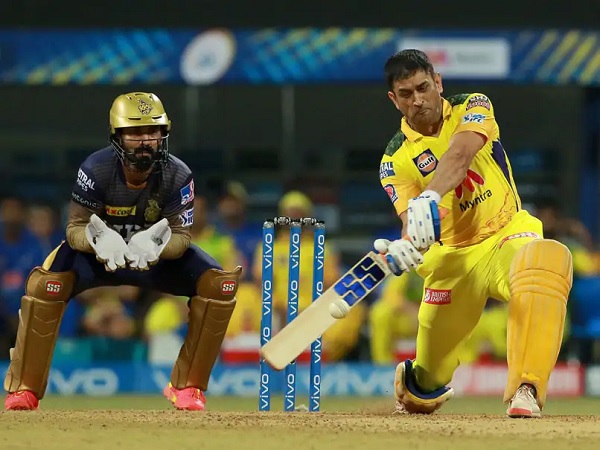 The toss was won by the Kolkata franchise and it took the decision of bowling first, however CSK had a great start as their openers Ruturaj Gaikwad and Faf du Plessis batted brilliantly and shared first wicket partnership of 115 runs. Ruturaj who was on the radar of his critics for some time now silenced everyone with a superb knock of 64 for which he played 42 balls (6 fours & 4 sixes) and his partner Faf du Plessis played a sensational knock of 95 runs not out in 60 deliveries (9 fours & 4 sixes). After Ruturaj Gaikwad’s dismissal, Moeen Ali (25) and MS Dhoni (17) played quick knocks and Ravindra Jadeja also ensured that he scored the maximum on the only delivery that he played. With the help of wonderful performances of its batsmen, CSK put up a huge total of 220/3 on the board in their stipulated 20 overs.

In response, KKR had a disastrous start as they lost their opener and in-form batsman Shubman Gill on the very first ball that he played. The CSK bowler Deepak Chahar ripped apart the batting line-up of KKR as he took four wickets and played an important role in two run outs. There was a time when KKR was 31/5 but Dinesh Karthik and Andre Russell not only stabilized the innings but also increased the pace of scoring runs and improved the chances of KKR’s win. Unfortunately for KKR, Andre Russell’s wicket was taken by Sam Curran when Russell was batting at 54 in 22 balls (3 fours and 6 sixes) and Karthik lost his wicket to Lungi Ngidi after scoring 40 runs in 24 deliveries (4 fours and 2 sixes). 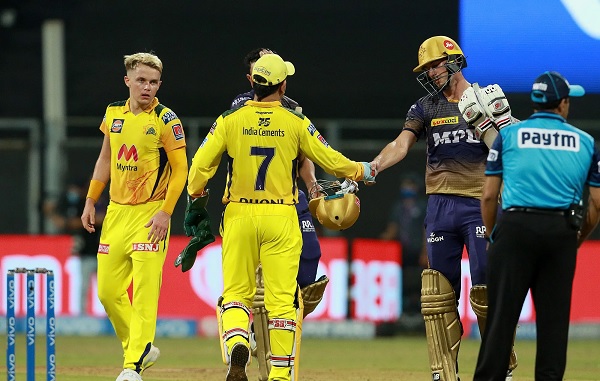 Nevertheless, there was one more KKR batsman who was in no mood to accept defeat and he was Pat Cummins who tore apart the CSK bowling attack as he scored 66 runs not out in 34 deliveries (4 fours and 6 sixes). There was no other KKR batsman who was able to counter the CSK bowlers and the whole KKR team was back in pavilion at the score of 202 with 5 balls still remaining and the Kolkata franchise lost the match by 18 runs.

It is quite surprising to see that 8 KKR batsmen were not able to score double digit scores but still KKR crossed the 200 mark. Faf du Plessis was adjudged as the player of the match for his beautiful knock and Twitterati also went berserk in this exciting match. Here are some selected tweets:

Back to back win for #csk @faf1307 was outstanding in his approach👏 so was @deepak_chahar9 And that inning of @patcummins30 must have given csk fans some heart ache. What a game👏

What a spell my brother @deepak_chahar9 🙌🏻 So proud and happy for you. Totally on fire 🔥#CSKvsKKR

#Dhoni's CSK are back at the 🔝! When mighty efforts by Russell and Cummins wasn't enough for win, you know CSK played like old CSK.

The @ChennaiIPL swagger is back …

Phew!! Edge of the seat finish not just for the ones watching at home but even for us in the commentary box 🎙️ Loved calling it. @IPL at its very BEST #KKRvCSK #IPL2021

What a game we witnessed at Wankhede. CSK defeats KKR by 18 runs, unbelievable 2nd innings from KKR. After being 31/5 they reached 201. One of the best game you'll ever see, high quality cricket from both the teams. Pat and Russell the fighters for KKR, both played outstandingly.