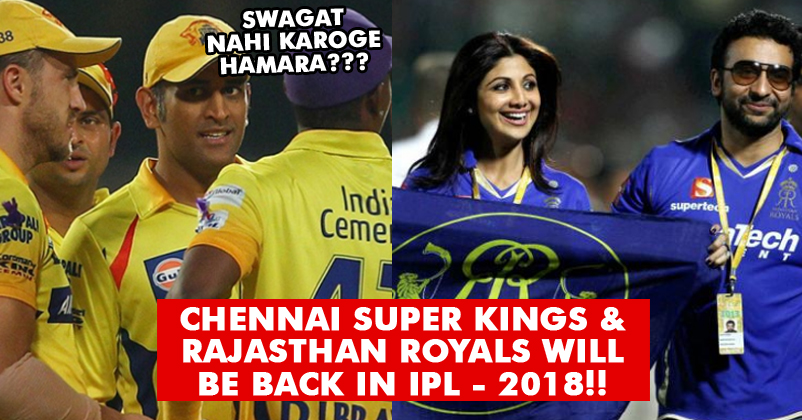 Fans of Chennai Super Kings & Rajasthan Royals can rejoice as their favourite teams are going to make a comeback in IPL 2018. As per BCCI CEO Rahul Johri, the ban imposed on both teams will be lifted and they will return to IPL next year. Also, this will bring an end to the temporary franchises Rising Pune Supergiant (Pune Franchise) and the Gujarat Lions (Rajkot Franchise). As per Rahul, BCCI is also planning to create fan parks in small towns and cities of the country.

“To increase the popularity of IPL in small towns and cities, fan parks will be created in such areas. Every match of the IPL is viewed by 20 lakhs people online,”

For those who don’t know, CSK and RR had failed to give financial clearances earlier due to which they were handed two-year bans. The two teams are currently serving their two-year suspension imposed on them by the Indian cricket board.

Yuvraj Singh Wished Happy B’Day To Rohit & Trolled Him! Rohit’s Epic Reply Is Hilarious!
Dhoni Does It Once Again! He Perfectly Hits The Stumps & Gets The Applauds He Deserves!