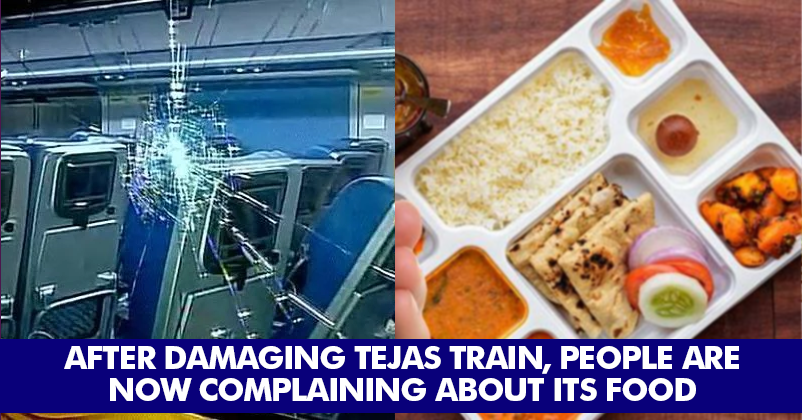 The first day of India’s first high-speed Full AC Mumbai to Goa Train ‘Tejas Express’ became the top talk of the country but not for any good reason. As the train returned back from Goa, it was reported by officials that passengers stole the headphones, broke LED Screens and left the toilets unflushed. Just when we had a moment of pride, this shameful act left our heads bent in front of the world.

Now, the problems for Tejas Express are not looking to end up so soon. Passengers of the train have now reported that the food served in the train is not up to the mark.

As per reports in Hindustan Times, Travellers who opted for non-vegetarian meal were served omlette with rusk, juice, butter and jam. A senior citizen, Ramesh Nevalkar, 68, who was travelling to Kudal asked-

“We know of omlette-bread or pav combination, but have never heard of omlette-toast. How can senior citizens have rusk with omlette,”

“The food was disappointing. Upma was tasteless, so we returned it,”

Some had issues with the timing too.

“The quantity is not much. We were told it would be a meal. Also, the breakfast was served at 8.30am, which is too late considering some had to leave home at 3 am to board the train,” said Bhakti Masurkar, a Goregaon resident.

The tea and coffee vending machines, too, were nowhere to be seen.

“Despite the fares being higher than Rajdhani and Shatabdi, we were just provided breakfast, not lunch,” said Mahesh Pavaskar, a journalist from Mumbai, who on a vacation.

Here is the Menu of Tejas Express The WiFi, too, is limited to single executive coaches.

Some passengers complained the lever of their seats was not moving smoothly.

Here is how people reacted on Twiiter –

Sir, lots of bad reviews of food being served in Tejas is coming out, before it becomes a flop affair, Pls do something

@sureshpprabhu I would like Tejas minus led screen , extra food items. Less food items will cause less pollution.

Well, this is just getting worse day by day. We hope both public and government come on same page some day.

Continue Reading
You may also like...
Related Topics:India, Tejas Express

Girl Was About To Get Arrested For Wearing A Top Which Didn’t Cover Her Shoulders! WTF!
This 9 Year Old Girl Wanted To Watch Adult Movie! The Reason Is Her Father & It’s Disgusting!