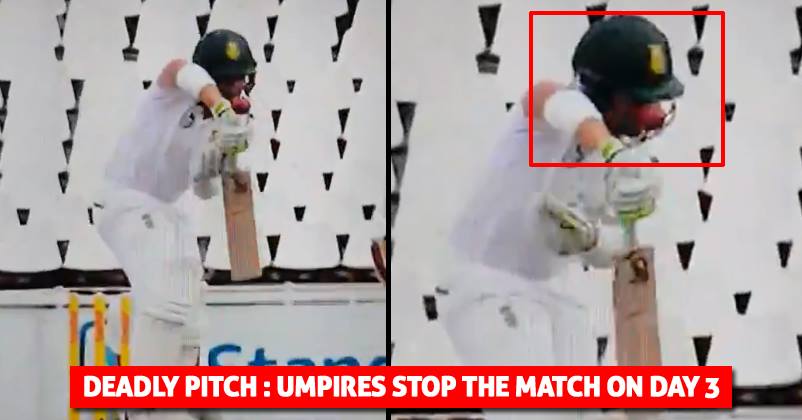 Sometimes, pitch conditions can be too dangerous and it might lead to cancellation of the game. A similar thing happened today in the 3rd test match between India and South Africa today in Wanderers stadium; for the 3rd time in the history of test cricket, umpires called off the play because the pitch was labeled as “Too dangerous”.

South Africa was chasing the target of 242 runs, but in the 9th over of their 2nd innings, an unfortunate incident took place. When Jasprit Bumrah delivered a bouncer to Dean Elgar, it hit the grille of his helmet.

It was owing to inconsistency in the pitch and large cracks that the ball couldn’t bounce well. Elgar was immediately given treatment; meanwhile the umpires had a discussion with match referee Andy Pycrott and called it off.

Umpires take teams off because of dangerous pitch when Elgar gets hit in the grill from a short delivery. I know it's been a tough track but short deliveries are meant to be intimidating, I believed. pic.twitter.com/WpJGeGNaLL

Many had already predicted that this pitch is indeed a dangerous one and playing on this is “Unfair”. Even on day 1 and day 2, Indian cricketers like Murali Vijay and Kohli have been hit due to inconsistent bounces.

After watching Elgar’s video, Twitter says that it’s his fault that he couldn’t judge the bouncer and the pitch is not to be blamed. Here are some reactions;

So what’s the difference of this pitch than earlier today? Sunny G is right. If the umpires were going to call it off, then it should have been done earlier…. but India battled through it. Now SA should have to do the same.. sadly Elgar didn’t play it well.

You can't cancel a match because a ball "bounced more than Dean Elgar expected it to". Then we will have to cancel every match Shikhar Dhawan plays.

So #elgar plays a bouncer poorly and they abandon the match ? What a bunch of losers #SouthAfrica they made this wicket to out do us and we outplayed them … our batsmen roughed it out on this wicket this is such a. Shame poor sportsmanship

A Short Pitched Ball Climbs Up. No Matter Which Pitch In Any Part Of The World You're Playing In. Stop Your Lame Drama You Chokers. 😡😠😡 #INDvSA #INDvsSA #SAvIND #SAvsIND #Elgar pic.twitter.com/O7AW1eokgC

Yeah that ball to Elgar was just fine. It's a terrible pitch, but if you need a reason to term it dangerous, that wasn't the delivery.

Whether match will be played on Day 4 or not, decision will be taken tomorrow morning itself. According to you was it Elgar’s fault or was the pitch actually the reason?

When Jasprit Bumrah Left Faf Du Plessis Confused. See One Of The Finest Deliveries Of India Vs SA
After Seeing Preity’s Bidding Today, Sehwag Trolled Her In Epic Way. Don’t Miss The Tweet