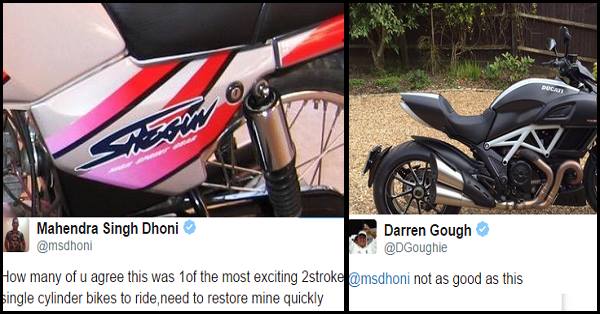 Mahendra Singh Dhoni is quite a popular personality as far as the best finishers of cricket are concerned and now he has done something which proves that he is adept in this task not only on the field but also off the field. The limited-over captain of Indian cricket team recently had fun time on social media over the discussion of his passion for bikes with Darren Gough, former England bowler when he tweeted the following and asked followers what they think about two-stroke cylinder bikes, adding the need of restoring soon the one he has.

How many of u agree this was 1of the most exciting 2stroke single cylinder bikes to ride,need to restore mine quickly pic.twitter.com/pdRytfwnzx

Amazingly, Darren Gough, former paceman of England tweeted back in reply to the tweet with his Ducati bike’s pic:

@msdhoni not as good as this pic.twitter.com/1dhJuwy33d

Shortly, their followers began to comment while Dhoni’s reply was much-awaited in view of the fact that the matter has reached the level of showing off and how Indians can lag behind in any aspect. And here comes the desirable tweet from our captain who did not let down his followers as he tweeted the pic of his Confederate Hellcat x132’s ride.

Probably, it stunned Darren and he made up his mind to close it then and there:

@msdhoni haha
It's a close one ! My @DucatiUK v your Harley

How did you find the counterblast of MS Dhoni? Mind-blowing, isn’t it? Share your views with regard to the article in the comments section below.

The Promo Of Upcoming #IndvsSA Freedom Series Is Nostalgic.!!
You Will Be Shocked To Know What Wasim Akram Asked From PM Modi