David Warner, the Australian cricketer is always in news whether he is playing cricket or not. He was last seen in the IPL 2021 before it got postponed due to the coronavirus pandemic and he was supposed to join his team for the tour to West Indies and Bangladesh but he along with six other Aussie cricketers pulled out of the tour. Though David Warner had a poor outing in the IPL 2021, he will certainly like to perform well when the remaining matches of the tournament will be played in UAE in the months of September-October just before the T20I World Cup.

Warner is quite famous on social media networks and he has garnered a huge Indian fan following with the help of videos that he makes on the songs of Hindi and other language movies. He has shared many videos in which he replaces his face on the faces of the actors in the songs and it won’t be wrong to say that he has certainly impressed the Indian audiences with his antics.

Akshay Kumar, Suniel Shetty and Paresh Rawal starrer “Hera Pheri” is one of the most popular movies of the Indian film industry and a number of memes have been made by using the scenes and stills of the film. Recently, David Warner tried to recreate a meme which is based on the iconic pose given by Khiladi Kumar of Bollywood and Warner posted it by asking fans as to who has done it better. 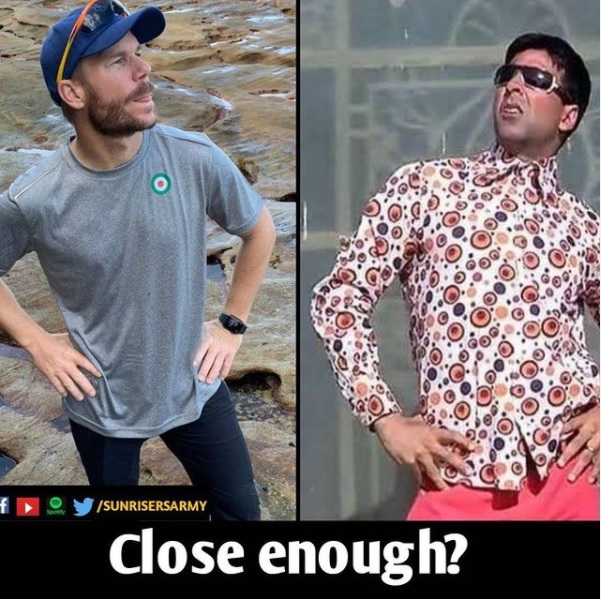 While his fans and followers started commenting and gave their opinions, the Afghanistan cricketer Rashid Khan who is David Warner’s teammate in the IPL team Sunrisers Hyderabad was left in splits and reacted on the post with laughing emojis.

The Aussie cricketer was quick to react and asked Rashid Khan as to why he was laughing at him.

Sunrisers Hyderabad had a pretty bad season in this IPL as they managed to win only one match out of the seven matches that they played. David Warner was not only sacked from captaincy but he was also dropped from the playing eleven against Rajasthan Royals and that too didn’t work as SRH under the leadership of Kane Williamson lost a match as well.

What do you think of David Warner’s post? Who did it better – Akshay Kumar or the Aussie cricketer?