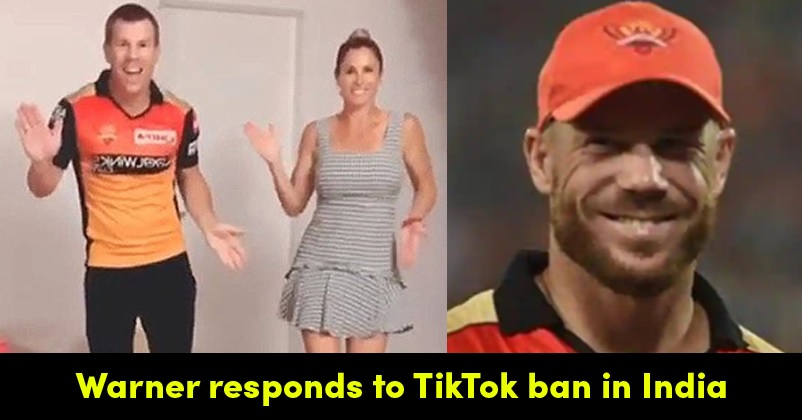 David Warner, the Australian cricketer, has utilized the lockdown period in becoming a TikTok star as he regularly posted videos on the platform. What made it more special was the fact that he was joined by his wife and daughters as well in making the videos. The Australian southpaw also posted those videos on other social media accounts as well, especially on Instagram.

David Warner’s fan following included a huge number of Indians as the cricketer performed on many Bollywood and Telugu songs. However, now the Indians won’t be able to watch his videos on TikTok as the Indian government has banned 59 Chinese apps including TikTok. The decision was taken by the Indian government after the Indian Army and Chinese Army clashed in the Galwan valley, Ladakh, few days ago. While 20 Indian soldiers got martyred, the Chinese side remained mum on the number of casualties suffered by them.

Recently, David Warner posted a video in which he is seen pulling his daughter’s car and the caption that he wrote was, “When the little one breaks down”

An online user tried to remind David Warner that TikTok is banned in India.

David also responded to the message by commenting, “That’s not good for you guys it’s ok in Australia.”

Another user told David Warner that most of his followers are from India only.

To this, the cricketer replied that he can’t do anything in this matter and Indians should respect the decision which has been taken by their government.

Here is what David commented, “They are indeed but I can’t do anything about it being banned from India. That’s the government’s decision and people in India have to respect that”. 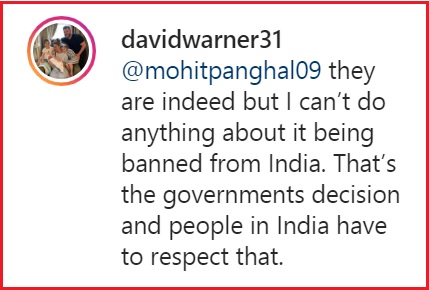 David Warner was supposed to lead Sunrisers Hyderabad (SRH) in the IPL 2020 but the tournament got postponed due to the coronavirus pandemic. However as per some reports, BCCI may organize the league in the months of Sept-Oct and it is also looking at the options of organizing it in Sri Lanka or UAE if the situation of the COVID-19 outbreak doesn’t appear to be satisfactory in the country.