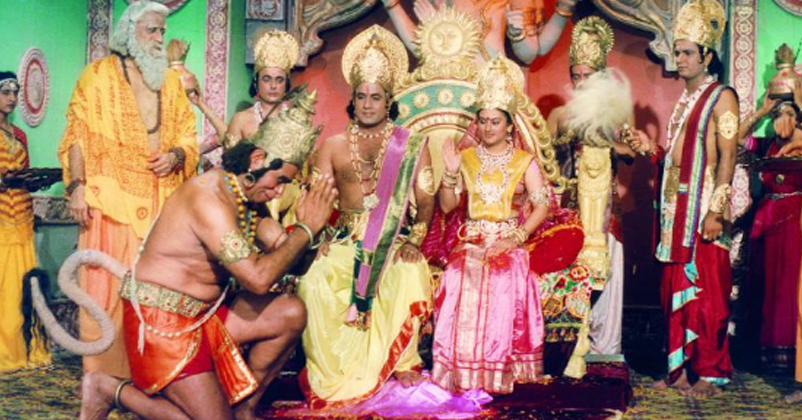 Immortal means one who cannot die. Yet it is said that Lord Rama, Goddess Sita, Laxman, Lord Krishna died. Did they actually die or was it some sort of ‘leela’? Well let’s discuss about the three main figures of Ramayana here. Lord Rama as all know is incarnation of Lord Vishnu, Laxman was that of Sheshnag and Goddess Sita was that of Goddess Lakshmi. Let us deal one by one how these great souls left the earth and come to a conclusion of can immortals die or is it a ‘leela’ misunderstood since ages. Lord Rama met Sita in the forests when his Horse of Ashwamedha Yajna was caught by Luv & Kush. He wanted to bring Sita back with him. Yet realising that the society won’t accept her easily he asked her for an ‘agni pariksha’ once more in front of the people. This mortified Sita and she refused to perform it and instead pleaded ‘Bhoomi Devi’, who is considered to be her mother as per Valmiki Ramayana (King Janaka found her in an urn while ploughing the field), to give her the eternal peace. She went along with Bhoomi Devi and went to Vaikuntha from there. Thus she did not die just changed form. After Goddess Sita left the earth Lord Rama came back to Ayodhya along with his sons and started grooming them. Lord Rama knew that his purpose of incarnation is not over but it would not be possible till Lord Hanuman and Laxman are guarding him. Thus one day Lord Rama requested Sage Durvasa to visit him but also asked him that he should not reveal that Lord Rama had called him for a meeting to anyone. Then Lord Rama dropped his ring that was given to him by Devi Sita in the ‘pataal’ by a tiny hole and requested Lord Hanuman to bring it back as the ring was very beloved to him. Lord Hanuman immediately went for the task. An old sage visited the palace and asked Lord Rama to talk in private and that whoever enters should immediately be given a death sentence. The old sage was actually Yama, the lord of death. Lord Rama requested Laxman to guard the door so that no one enters. At that time Sage Durvasa came to meet Lord Rama as he was invited. Laxman stopped him and asked the reason for his visit but Sage Durvasa did not tell as Lord Rama had forbidden him. Since Laxman does not let Sage Durvasa to enter he gets infuriated. Laxman requests Durvasa to return again later as Lord Rama was busy. This infuriates the sage even further and he threatens to curse the whole Ayodhya. Laxman enters the room to tell about the sage’s arrival to Lord Rama. Yama disappears from the place. Rama tells Laxman to bring Sage Durvasa to him. Laxman knew that as per Rama’s orders he will have to give death sentence to Laxman. Laxman did not want that Rama is blamed for killing his brother thus he goes to the Sarayu River and changes form to Sheshnag (Ananta Sesha), thus ending is incarnation. But here also there is nothing that says he died. It says he changed form. Lord Rama’s departure from earth is not illustrated in Valmiki Ramayana and the facts can be found in ‘Padma Purana’. Lord Rama after Laxman’s departure from earth bestowed the kingdom to Luv and Kush and went to Sarayu River. All the ‘devas’ are present at the place to look at the great event. At the spot where Lord Rama was standing appears Lord Vishnu in original form to bless the people gathered there. He did a ‘leela’ and converted to Godhead which were only visible to Lord Shiva and Lord Brahma. Also it is interesting to know that Rama is the first incarnation of Lord Vishnu to voluntarily give up his existence. Earlier incarnations were generally ended at hands of mystical creatures. Since Lord Rama was there to portray the ideal way of living and had gained the name of ‘Purushottama’ he had to show the people that death is the final reality of human life and must be accepted voluntarily.

So in all above cases we saw that they just changed forms which is termed as death and thus can say our ancestors in a way explained the law of energy conservation which can only change form and not be destroyed or created.