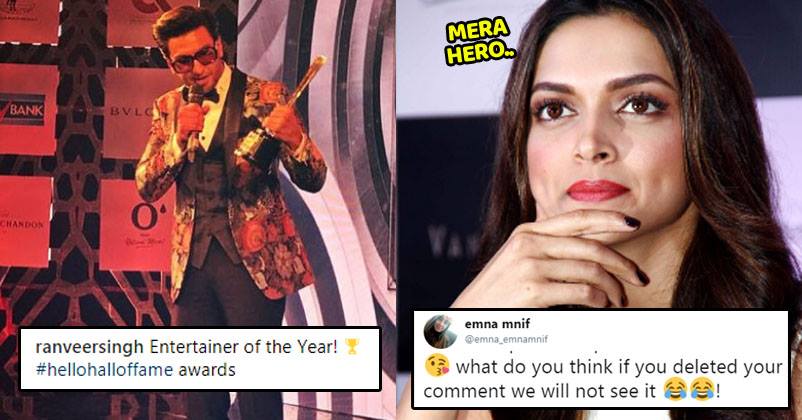 Undoubtedly, Ranveer Singh and Deepika Padukone appear to be madly in love with each other and recently, it was being said that the parents of both the actors have met and finalised their wedding date.

Ranveer Singh keeps on posting his pics on Instagram and we have seen that Deepika also comments on his photos. 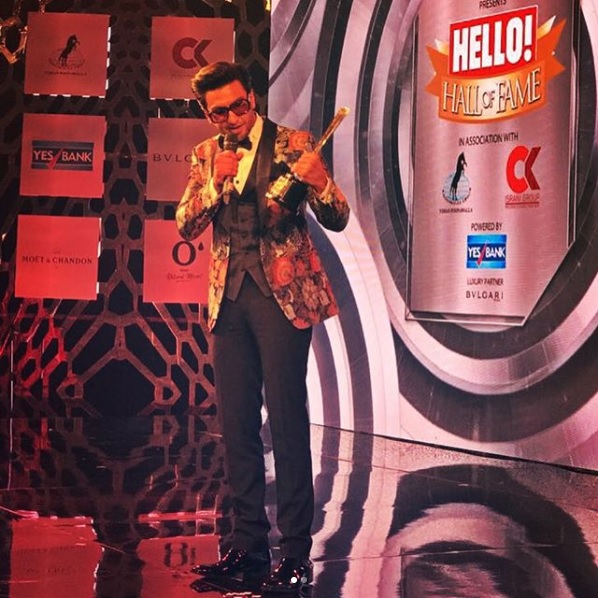 So this time also when Ranveer posted a couple of pics in which he was also showing his award, Deepika couldn’t stop herself from commenting “Mine” with heart emoji.

Entertainer of the Year! 🏆#hellohalloffame awards

It seems as if she wanted to tell the whole world that Ranveer is “mine” but within seconds, she deleted her comment.

Now it is a matter of discussion among the fans of both the actors as to why she deleted her comment despite the fact that we all know that Ranveer is completely hers.

Twitter also reacted over it and here are some selected reactions:

You can’t hide anything from media and fans:

@deepikapadukone «mine….😍😝» nice move deepika to express love smart girl 😂😘 what do you think if you deleted your comment we will not see it 😂😂! We will be always after you to the day if marriage 💖 because we love you @DeepVeerNews @RanveerOfficial pic.twitter.com/rJXkN4K7Ar

Lol even tho deepika deleted it we still got the screenshots 😎, so cute that she called him 'mine' 😍 https://t.co/6x0wt51ynm

Fans want to know in detail:

Deepika? What do you mean? Mine what? Or should I say who? We just don’t understand so elaborate a little, please? Thank you. pic.twitter.com/yZDnOElbrD

“Mine 😍😝” WHAAAATTTT!!!! YAS DEEPIKA HE IS YOURS ONLY YOURS! MY HEART RNNNN OMGGGG! SHE SAID THIS!?? *faints* 😭❤️ pic.twitter.com/haAUPYVKfX

So DEEPIKA called Ranveer 'mine'..

Ya'll can go home now, my superior ship is about to land to its destination and i can't express the happiness assfhkssfhjkjkjkkk pic.twitter.com/TgR0NEFmIL

Is Anushka Sharma Pregnant? This Tweet Of Virat Kohli Has Left People Guessing
Deepika Padukone Clicked With A Mark On Her Lips At An Award Function. Is This A Love Bite?