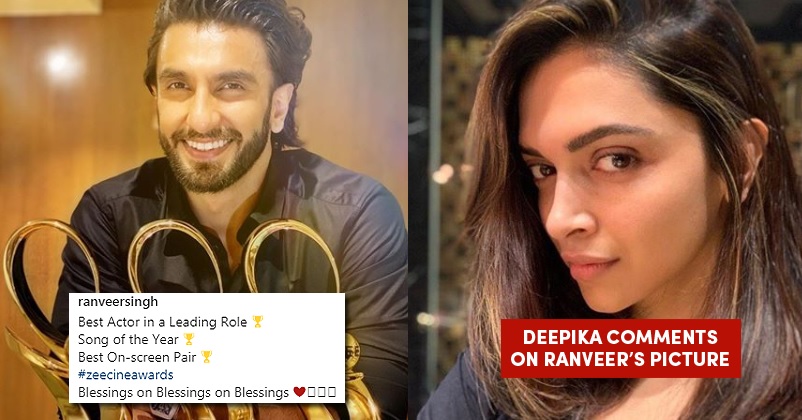 Bollywood actor Ranveer Singh is on cloud nine as his last release “Gully Boy” was a blockbuster and his performance was applauded by not only audiences but critics as well and he has won many awards for the same. Recently, “Gully Boy” won three awards at the Zee Cine Awards 2020 – Best Actor in a Leading Role, Song of the year and Best On-Screen Pair.

Undoubtedly, this was a proud moment for Ranveer Singh and he shared it with his followers by posting a photo with all the three awards. 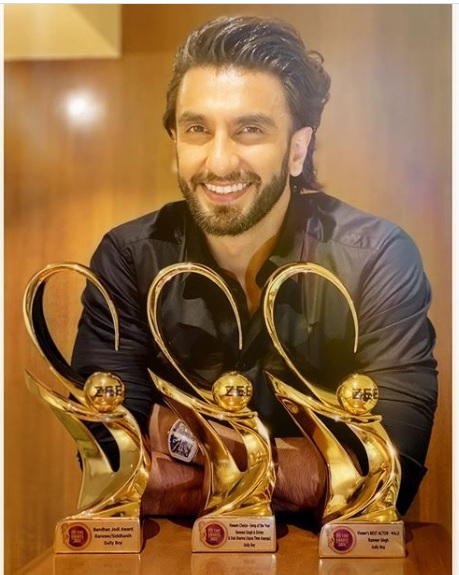 The caption that he wrote was,

“Best Actor in a Leading Role 🏆

Song of the Year 🏆

He soon started getting congratulatory messages but there was one comment that was very special for the Bajirao of Bollywood as it was made by none other than his lovely wife Deepika Padukone. The “Chhapaak” actress wrote, “Hi, Your soo handsome…. Okay Bye…”

Ranveer and Deepika are among the most loved couples of B-Town and they don’t shy away from showing their love for each other. They both will be seen together in Kabir Khan’s “83” in which Ranveer Singh is playing the character of former Indian cricketer Kapil Dev while Deepika will be essaying the role of Kapil Dev’s wife Romi Dev. Ranveer will also be seen in “Jayeshbhai Jordaar” which will hit theatres on October 2, 2020.

Deepika Padukone’s last movie “Chhapaak” didn’t perform well at the box-office despite the fact that it was based on a very important issue which was related with crimes against women. In “Chhapaak”, Deepika played the character of an acid-attack survivor and the film was directed by Meghna Gulzar. Other than “83”, Deepika will be seen in an untitled movie which will be directed by Shakun Batra and will also star Siddhant Chaturvedi and Ananya Panday.