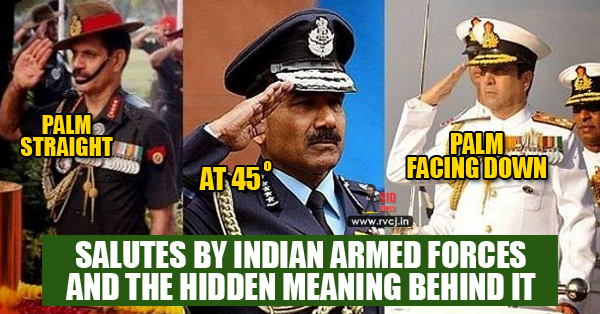 Surely none would have missed the republic day parade. Yeah it is an awesome day for every Indian and all love to watch the military parade. The personnel of the three defence wings, that is, army, air force and navy greet each other by a salute. If one looks closely they would have watched that the way of rendering a salute is different in all the three services. This is clearly visible when the three chiefs salute at the ‘Amar Jawan Jyoti’ at India Gate, Delhi. Ever wondered why? We bring to you the exact reason for this culture of the defence forces. Method:- The salute rendered by an army man will be with open palms facing the person being saluted.

Reason:- The salute is rendered this way to show that they are carrying no weapons and that the other person can trust them. Reason:- The salute is done at 45° from the ground showing the progress to the skies. It is like fulfilling their motto of ‘Touching the sky with glory’. Method:- The salute in navy is with the palm facing down. It has a very old cultural origin.

Reason:- Way back in the medieval times the ships were more of hand operated and the sailors kept working on operating these ships. Due to operating levers and other machinery their hands would get all greasy and extremely dirty so they saluted with palm facing down to show respect to their senior.

Wasn’t that interesting? Do not forget to share your views in the comments below.

15 Amazing Facts You Didn’t Know About Olympic Games.!!
If You Talk To Yourself Then You Are Not Crazy – Scientifically Proven