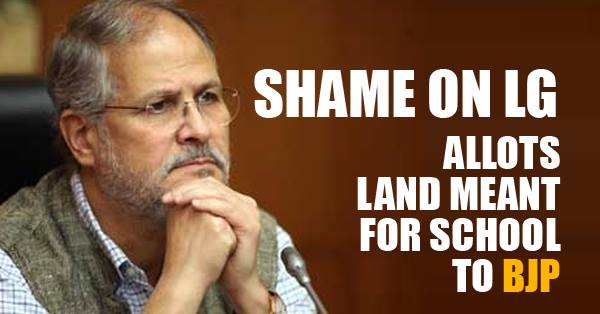 The battle between Delhi government and the lieutenant governor, Najeeb Jung has once again gained momentum and this time it is on the matter of allotment of school land to BJP for office making purpose, by the LG of Delhi.

The matter has come to light as the Deputy Chief Minister of Delhi, Manish Sisodia has written a letter to the LG, expressing shock over his decision and also telling him about the poor condition of schools and how hard it is for students as ‘150 students being forced to study in one class.’

Deputy Chief Minister of New Delhi, Manish Sisodia wrote, “I’m sad to know that you’ve allotted a piece of land meant for school to build the office of Bhartiya Janta Party. While we are desperately looking for every possible space in the capital to build new classrooms, you as the LG decided to take away the school land to gift it to a political party. I’m still wondering as to what benefits did you see for common people in this decision?”

Manish Sisodia was also surprised at the speed at which the whole matter was worked out as he wrote, “It’s quite extraordinary to see the speed with which you’ve implemented this decision within few months. Delhi Development Authority has dozens of applications for allotment of land for school use pending for years. I don’t understand why allotting land for school use take years but it takes just few months to allot school land to a political party.”

Twitter has also expressed shock and surprise on this matter under hashtag #ShameOnLG:

ronakjosi RT HIN_DU: Guess Who is most happy after watching this trend #ShameOnLG ?
Ans : Samsung 😂

LG may have authority to change land use,but singularly favouring BJP is blatant fulfillment of obligation to political masters #ShameOnLG