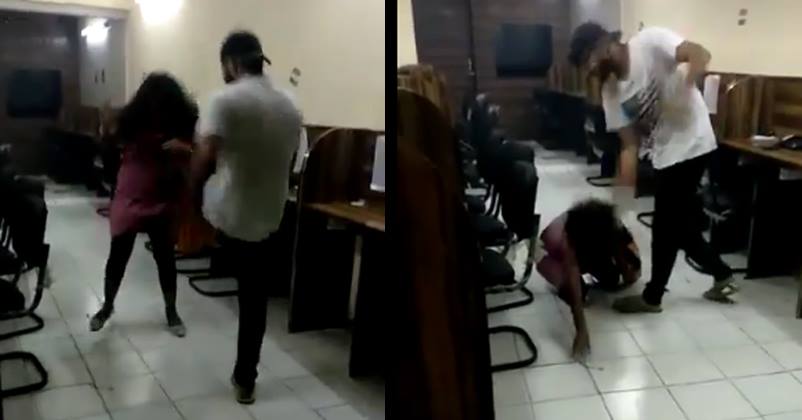 The video was recorded on 2 September inside the Bpo which is located in Uttam Nagar in Delhi. Bpo is currently running by Rohit’s friend Ali Hasan and according to the report the 21-year old girl recently started working at the BPO

Incident of Tilak Nagar, Delhi…
Son of a "Policeman" and he is Member of "Bajrang Dal" showing his so called "Mardangi" at Girl and Beating her like hell.

His name is #Chaudhary_Rohit_Tomar, and a son of Sub Inspector Delhi Police.@AAPExpress @ANI @BBCHindi @BBCWorld pic.twitter.com/OfaCIuc7Ie

Now police have filed a case against Rohit Tomar after victim Jyoti lodged a complaint against him at Tilak Nagar Police station on Wednesday, but police were unable to find him and they are trying to connect with Ashok Tomar but officers’ phone has been switched off

@DelhiPolice has taken stern action, a case under section 354/506 IPC has already been registered against Rohit Tomar. Further action is being taken to arrest him.

According to the report, there was a time when Victim Jyoti was in love with Rohit and now he is trying to assault and abuse her.

Indian Government Bans 6000 Medicine Brands Including Saridon. Here’s How Twitterati Reacted
Jeff Bezos Turned Up At Pyjamas For Board Meeting For A Noble Cause & It Will Make You Salute Him