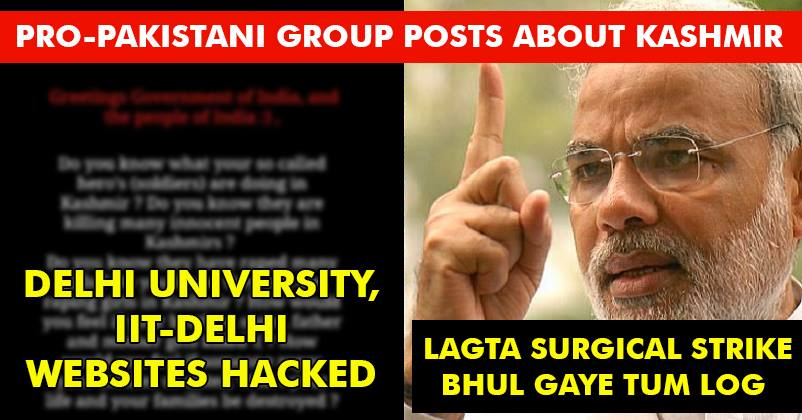 It is the major news of the day. The official website of the three central universities in India is hacked.

The universities – Delhi University, Aligarh Muslim University and the Indian Institute of Technology-Delhi (IIT-Delhi) are hacked today and the there are messages all over the website.
The messages are pro-Kashmir and are spread by a group who call themselves ‘PHC’.

The messages on the website read, “Greetings Government of India, and the people of India. Do you know what your so-called heroes (soldiers) are doing in Kashmir? Do you know they are killing many innocent people in Kashmir?”

“Pakistan Zindabad,” is the footer note in a fluorescent green is displayed. There are two videos at the bottom that show the armymen’s brutalities in Kashmir and people’s protest over their brutal behavior.

The hackers had their clear intentions and they mentioned that they have no other motives than to make their message reach Indian Government.

Here’s what they wrote, “This hack is in response to Code-Man’s hack of railways.gov.pk (http://www.zone-h.org/mirror/id/29230257?zh=1) and in the solidarity of innocent Kashmiri people being killed by the Indian Army. Thank you, Regards – PHC”

The websites of the central universities are managed by National Informatics Centre run by the State.