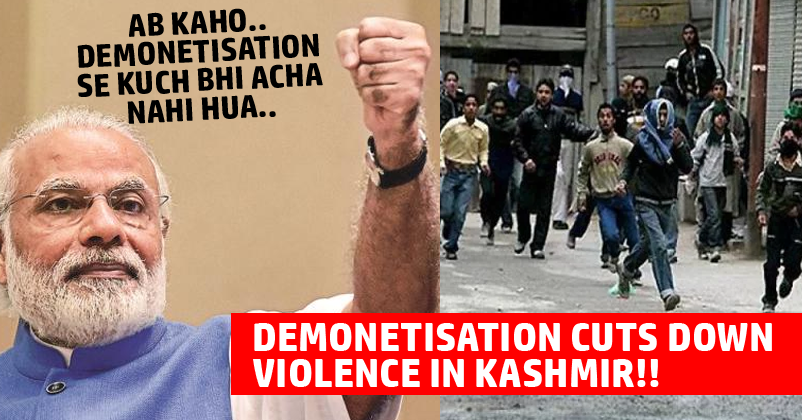 There are always two sides of a coin. Demonetization was the coin which was flipped by our PM Narendra Modi with the aim of curbing many problems. However, since the last 2 months, he and his government have been constantly accused by the opposition for drowning Indian Economy, which is kind of true.

However, now, if we look into the other side of the coin, the decision of demonetization has really paid off in some good sense. Our country has been attacked by various terrorists in recent past few years. Various bomb blasts have been directed by the masterminds across the border and their execution was only possible by the use of FAKE CURRENCIES that were printed by their very own printing agencies. However, after demonization, their business have been really hard and its impact is such that 2 two main Pakistani presses engaged in printing counterfeit Indian currency have been forced to shut shop. The Indian Agencies who are now on the survey also said that there has been a decline of 60% in the occurrence of any violence in the Kashmir Valley which was usually funded by the masterminds across the border (Pakistan) so as to disrupt the peace.

There have been reports that states an extreme slowdown in violence in the areas affected by Left Wing Extremism and the Hawala Trade has fallen off to 50% as per the assessment of the impact of demonetization in the past 30 days. The effect of demonetization has largely been hit in areas controlled by Maoists and militants. After the demonetization, the terror networks operating in the valley have been weakened that has helped in many successful counter-terrorist operations and hence, the local terrorist commander leaders who used to lure the youth of Kashmir in stone pelting are now being desperate for an abundance of cash to sponsor terrorism. The illegal arms and ammunition business has also been hit very badly which has forced many terrorists in Northeast leave the border for their security.

Even while addressing the nation on the evening of 8th November 2016, Narendra Modi did emphasize on this issue of curbing the cross-border terrorism by banning the 500-1000 rupees notes. Well, this was indeed a well-calculated risk but on the price of vast disturbance caused to various people across the country. What are your views about this news? Isn’t that great? Share your opinion in the comment section below.

This Note Is A Must Read For All Women Who Think It’s Their Fault That They Were Molested!
Sehwag Reacts On The BSF Jawan’s Viral Video! Here’s What He Had To Say!