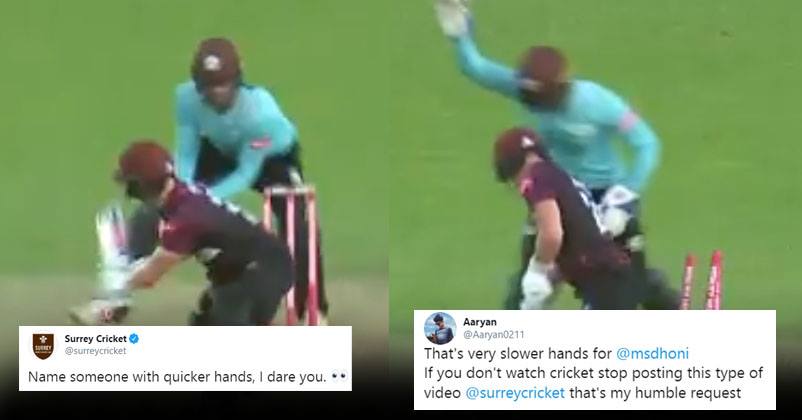 Surrey Cricket received the wrath from desi twitter after they tweeted about their wicket keeper Ben Foakes and acknowledged him as the quickest wicket keeper. Well, it didn’t go down well with Indian cricket fans as we all know Dhoni is one of the finest wicket keeper because Mahi has proved it with his perfect stumpings.

County Cricket posted a video on their official twitter handle in the video Foakes can be seen knocking the stumps of the batsman as he tried to reverse sweep a spin bowler but failed to hit it. Foakes without wasting a second send the cricketer back in the dressing room. Surrey cricket posted the clip with the caption, name someone with quicker hands, I dare you.

Name someone with quicker hands, I dare you. 👀 pic.twitter.com/ayZJcuXdyL

Dhoni’s well-wishers were irked and they were in no mood to believe what Surrey cricket has to say because for them no glovework is better than MSD’s in the cricketing world at present.

Check out how Mahi’s fan named the fastest wicketkeeper:

Ever heard about MS Dhoni ??

Dare accepted || Name: @msdhoni
Find Someone With More Quicker Hands As him! 👀 pic.twitter.com/IoeVzJkk2Z

@msdhoni 😎⚡️⚡️
I don't think ur question is too difficult 😂😂 pic.twitter.com/alVdcqiMMY

🤣 do you know some cricket outside of surrey ?

@msdhoni must b laughing at this video🤣🤣🤣

Steve Smith Says Jofra Is Yet To Get Him Out. Jofra Archer Gives A Brilliant Response
Finally Ronaldo Opens Up On Rivalry Between Him & Messi On Completion Of Awards